Turning a Sensor Toward Concussions and Kids

After years of researching blows to adult heads, scientists divert their energies to the peewee set 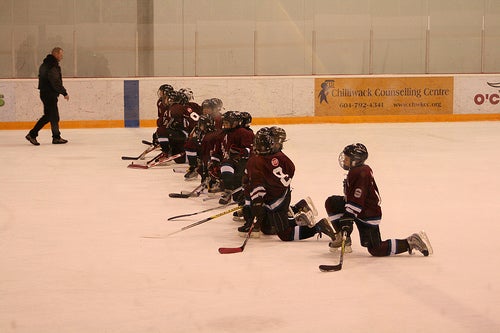 With grownups from the NFL to the DOD paranoid about concussions, it’s about time the research community asked, “What about kids?” Research published this month in the_ Journal of Sports Engineering and Technology_ offers a unique look into how hard kids are getting hit in hockey. The findings suggest players are suffering the biggest blows to the tops of their heads.

Fourteen hockey players, at an average age of 13 years old, were monitored during the 2006-2007 season (58 games and 51 practices). Standard hockey helmets were retrofitted with the Head Impact Telemetry System from Simbex allowing simultaneous tracking of the entire team. Inside each helmet six linear accelerometers, a wireless transmitter and a battery pack sent real time data on exactly how hard and where on the helmet each player was hit. The HIT system has been used extensively in Division-I college football for similar studies, but this is the first such investigation of youth hockey.

A total of 4,543 impacts were analyzed with an average impact of 20g and a median of 71 impacts for each player per game. The data showed no difference in impacts between defenseman and forwards, but did find that hits were significantly greater during games than in practice. Perhaps most surprising was the data regarding impact location. Players were at least three times as likely to receive an impact over 80g to the top of the head than to the front, back, left or right. Bad form in developing players might be the cause of this unexpected trend. While defining an exact concussion threshold will likely never occur, previous research in football has suggested a greater likelihood of concussions at impacts above this level. Interestingly, of the 41 impacts above 80g detected, only one resulted in a concussion.

So, what does all this mean? In short, nobody knows. The specific findings regarding impacts to the top of the head might suggest equipment modifications, rule changes or a need for greater emphasis on technique. Whether 71 impacts per game at 20g’s can cause long-term cognitive problems isn’t won’t be answered anytime soon. The NFL has been at the forefront in concussion research but seems to unearth more questions than answers with each publication. But, what’s certain is that a shift in focus from the old to young is both necessary and overdue. Better late than never.