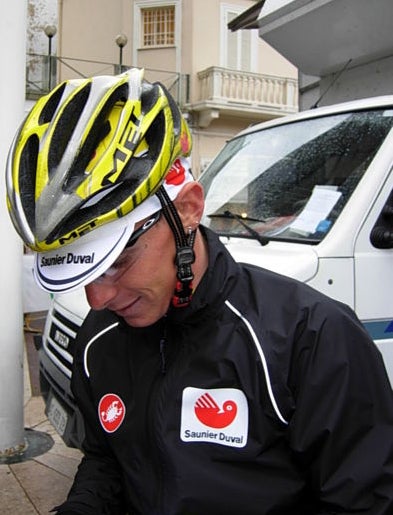 After years of trying, and often failing, to play catch-up with drug cheats, anti-doping authorities signaled Thursday that they may actually be pulling ahead, with reports that a high-profile cyclist at the Tour de France has been busted for a drug so new few people had even heard of it.

“This case is a further indication that the net is closing in on drug cheats,” said Frédéric Donzé, spokesman for the Montreal-based World Anti-Doping Agency, which lead the development of the new and previously unknown test. “It shows that the work we’ve conducted at WADA to anticipate doping trends is paying off.”

Rising Italian star Riccardo Ricco, who was considered a dark horse for overall victory in the Tour, was kicked out Thursday morning after authorities announced that he had tested positive for CERA (Continuous Erythropoiesis Receptor Activator), a drug for anemia patients that boosts the production of red blood cells. Known by the brand name Micera, CERA is a more potent, third-generation version of EPO, the blood-booster that has plagued pro cycling and other endurance sports for more than a decade.

Though Micera has only been on the market for a few months, it was revealed Thursday that the pharmaceutical company Roche, which developed the drug, supplied WADA with the CERA molecule well before it became commercially available. This enabled scientists to anticipate athletic abuse of the drug and have a test in place to nab any early adapters. By contrast, EPO was widely abused for years before there were any tests that could detect it.

The strongest message anti-doping authorities sent out Thursday wasn’t that Ricco had been busted—the final outcome will await the results of his backup sample—but rather that they had at their disposal a test that no one even knew existed. “We don’t have to tell the athletes that we have a test, just like they don’t have to tell us if they’re using drugs,” said Donzé. “It’s like intelligence work, and we’re doing it quietly. We are very aware of the development of other new types of EPO, too. This is ongoing.”