Was the horse merely tired or was the hoof injury worse than his trainers claimed? 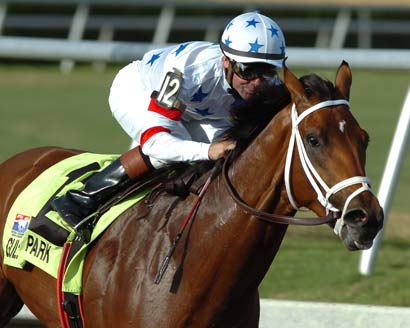 Was it the foot? No matter the credentials of experts claiming otherwise, Big Brown’s failure to win the Triple Crown will forever be linked to that question. After dominating at the Kentucky Derby and the Preakness, Big Brown dived, finishing in last place despite being favored at 1-4 odds.

A week before Belmont it was revealed that Big Brown had what’s referred to as a ‘quarter crack’ on the inside part of his left front foot. The crack was 5/8 inch and runs vertically down from the hairline between the toe and the heel where the hoof wall is thinner. The injury is apparently quite common in racehorses but can range in severity and require recovery time. After missing three days of practice, hoof specialist (they exist?) Ian McKinlay applied steel sutures to pull the crack together which allowed him to continue training. The day before the race the sutures were removed and then replaced before applying an acrylic and fiberglass patch to the crack. The procedure took 40 minutes and the adhesive set in five minutes creating a cement that’s “stronger than the hoof itself,” according to McKinlay.

The injury placed trainer Rick Dutrow in the crosshairs of critics concerned with the dwindling durability of horses and the alleged neglect by owners and trainers. Dutrow claimed before the race that winning the Triple Crown was a “foregone conclusion” but also realized that losing would amplify the noise.

“If he runs terrible and he’s got a bleeding foot after the race, I’m sure there will be plenty of questions thrown my way,” he said. “If he does what he’s already been doing, maybe they’ll say, ‘Well, it looks like they handled it the right way.'”

And, questions there have been. From the foot, to the missed training, to Dutrow’s controversial use of steroids and pain medications, it’s the answers that are missing. While there was no blood or apparent broken foot, something was different and everyone knows it.

“He was empty. He didn’t have anything left,” said jockey Kent Desormeaux. “There’s no popped tires. He’s just out of gas.” He added that Big Brown “was in no way, shape or form lame or sore. But there’s something amiss, probably just tired.”

Merely the denial of a popped tire will continue the debate until a credible explanation can be offered. McKinlay, for one, was confident before the race. “As far as his foot goes, I don’t even thing it’s an issue,” said McKinlay.

But, for many, it will remain a question.