Ever wish you could read minds? While the technology to correctly call your poker buddies’ bluffs still eludes us, researchers... 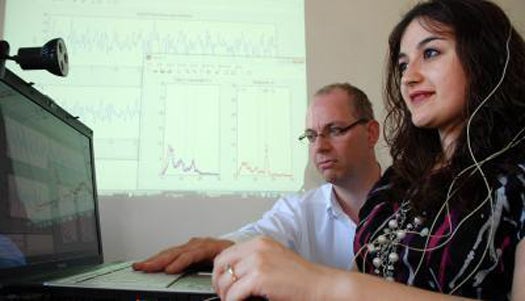 Ever wish you could read minds? While the technology to correctly call your poker buddies’ bluffs still eludes us, researchers in the UK have shown that brain-to-brain communication is indeed possible. All you need is some electrodes, a computer, and an Internet connection.

Brain-computer interfacing, or BCI, isn’t new. Researchers have used computers to read signals from the brain before — DARPA is sponsoring initiatives to use such technology to develop prosthetic limbs that respond to neural commands — but Dr. Christopher James at the University of Southampton has taken BCI a step further, showing that person-to-person communication is possible through true brain-to-brain interfacing.

In James’s experiment, two people are hooked up to EEG amplifiers that measure activity in specific parts of the brain. The first person generates a series of zeros and ones, imagining moving his left are for zero and his right arm for one. The first subject’s PC recognizes those thoughts as ones and zeros and transmits them over the Web to the second subject’s PC, which flashes an LED at two different frequencies for one and zero. The EEG extracts the LED light’s information from the subject’s visual cortex and parses it back into binary code. Thus, brain-to-brain communication is achieved.

While this initial step is clearly rudimentary, the transmission of ones and zeros via the brain mimics the transfer of data by computers, albeit at much lower volumes (for now). For those suffering from severe muscle wasting ailments or “locked-in” syndrome, brain-to-brain communication could open a channel for conversation with the world around them, and even Dr. James admits it has Existenz-esque implications for gaming.

If that’s not sci-fi enough, consider this: the person receiving the data via the LED flashes doesn’t even know whether the light pulses represent ones or zeros. The differences in the light patterns are too subtle for the human eye to detect, but using human optics as a conduit, the computer can extract the patterns in the light and decode the message. That’s right, singularity devotees and conspiracy theorists: the machines are using you.