Those chemical handwarmers you stuff in your gloves during ski season usually solve just one problem: frosty digits. But the... 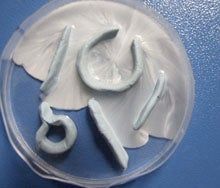 Those chemical handwarmers you stuff in your gloves during ski season usually solve just one problem: frosty digits. But the sodium acetate used to generate that heat is a far better problem solver than you might think; researchers in Bristol, U.K., have created a “hot ice” computer that utilizes the chemical compound to solve mazes and tackle various other computing problems.

Hand warmers made with sodium acetate — known as “hot ice” for its crystalline behavior and resemblance to ice — are simply bags filled with a supersaturated solution that has cooled to ambient temperature. When you crack the metal disk in the solution, you create a nucleation center, spurring crystallization of the solution and giving off heat as part of the reaction.

Professor Andrew Adamatzky at the University of the West of England in Bristol is no stranger to unconventional computing, having tinkered with a slime mold computer and reaction-diffusion computers in the past. So the way sodium acetate crystallizes in a traveling wavefront is a natural fit for his purposes. By controlling the route the wavefront takes as the reaction moves through a solution, it can be harnessed to perform computations.

In essence, it works like this: computational inputs are made to a petri dish filled with supersaturated solution by setting off nucleation at various points in parallel. Adamatzky manipulates the path of the ensuing wavefronts by placing silicone obstacles in the petri dish, and has even devised a means to create AND and OR logical gates by harnessing the behavior of the chemical reaction in a T-shaped petri dish. By monitoring the paths the wavefronts take and analyzing the crystallization at the edges of the crystal structures, researchers can determine whether the computer has solved the problem correctly. It does. Most of the time.

However, just like a PC, the hot ice computer can hang, the equivalent of hardware or software SNAFUs that regularly splash ominous error messages across the screens of desktop computers. As Technology Review points out, Adamatzky’s hot ice computer may be somewhat more like a conventional computer than he wants it to be.

Adamatzky has posted videos of his hot ice computer in crystallizing action here.