FYI: Why Do We Only Search For Aliens That Resemble Life Here On Earth?

A team of Austrian scientists have recently taken their colleagues to task for limiting their extraterrestrial search to carbon-based, water-reliant... 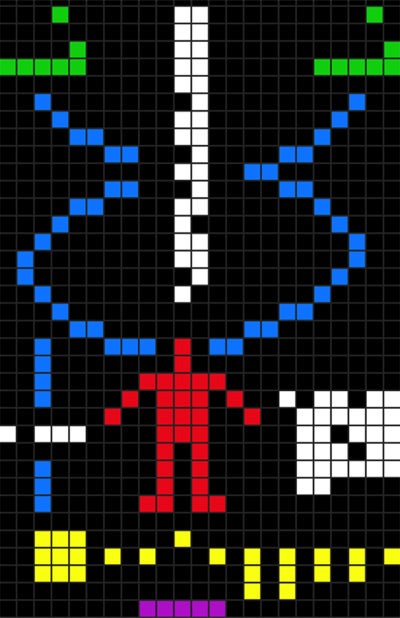 Sent via radio toward the M13 star cluster some 25,000 light years away, the Arecibo message was composed by Dr. Frank Drake and Carl Sagan to be decoded graphically.
SHARE

A team of Austrian scientists have recently taken their colleagues to task for limiting their extraterrestrial search to carbon-based, water-reliant life. In response, they’ve begun experiments to see whether, water aside, any other solvents have the necessary properties to support extraterrestrial life.

Recently we spoke to Dr. Seth Shostak, senior astronomer at SETI, on just why it is we think extraterrestrial life requires water and carbon. Is it simple scientific fact? Not quite. A lack of humility? Not that either. The answer, as is often the case in the annals of science, is one of practicality.

Q: So why do we limit our search to carbon-based, water-reliant life like we have here on Earth?

It’s true: most researchers who search for extraterrestrial biology look for “life as we know it” – which is to say, carbon-based organisms dependent on liquid water.  To some extent this is just pragmatism; after all, it’s not easy to design an experiment to search for life-as-we-don’t-know it, unless you expect it to be large and complex enough to wave at our cameras.

But the idea that water is essential to life isn’t just silly provincialism.  After all, earthly organisms are built up from complex chemistry, as anyone who’s taken a course in molecular biology knows.  The building blocks of your cells are not simple (think of DNA).  So in order for life to get started, nature has to cook up some pretty intricate chemical structures.  That kind of bottom-up construction project can only succeed if atoms and molecules frequently interact – something that happens best in a liquid medium.  A liquid facilitates chemical interactions the way parties facilitate social interaction.

Since water is both plentiful throughout the cosmos and is liquid over a wide range of temperatures, many scientists regard it as the indispensable prerequisite for life.  Sure, you can think of other compounds that might work – Saturn’s moon, Titan, has lakes of ethane and methane, for example, and who knows?  Maybe they’ve produced something that’s alive.  But Titan’s lakes are far colder than the lakes of a watery ocean, and as a result chemistry is painfully slow there: perhaps too slow to have succeeded in spawning something that can thrive and reproduce.

It comes down to this: it would be hubris of a high order to expect alien life to be identical to what we find on Earth.  Extraterrestrial biochemistry is bound to be different, and plants and animals from another world probably won’t look much like the pictures in your biology textbook either, given their different evolutionary history.  But carbon is able to form complex molecules far better than any other element, and water is the best liquid, as far as we know, for aiding and abetting intricate chemistry.  So while alien life might not be life as we know it, there’s a good chance that much of it will at least be recognizable.