If it were up to us, everything would be faster by at least one order of magnitude, but the laws... 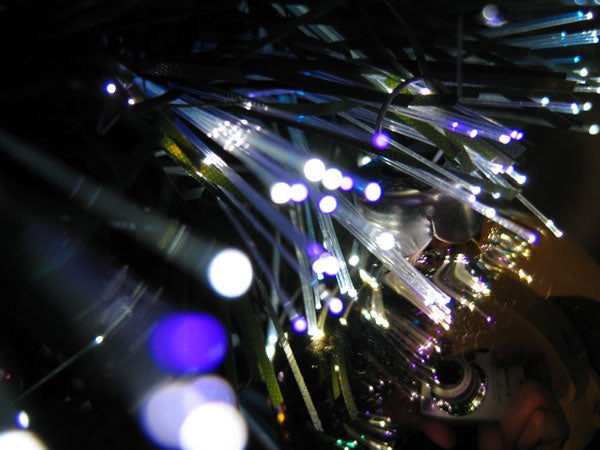 If it were up to us, everything would be faster by at least one order of magnitude, but the laws of physics often get in the way of unlimited speed and efficiency. Take fiber optic data transfer: the pulses of light carrying data through the worldwide network of fiber optics move really fast, but alas, cannot go any faster than they do. However, scientists at Cornell University have figured out a way to pack more data into those pulses of light, using a system they’re calling a “time telescope,” which has the potential to increase fiber optic data speeds by 27 times.

The “time telescope” works by passing the data-laden pulses of light through two “time lenses.” A silicon waveguide combines a passing light pulse with another infrared laser pulse that vibrates the atoms of the waveguide, in turn shifting the frequencies of the pulse before it exits the waveguide. The front of the wave pulse is shifted down in frequency, the back end shifted up. The result: the front slows, the rear speeds up, and the light pulse crushes together like a soda can that’s been stepped on, with the rear catching up to the front right at the lens’s focal point.

In the Cornell team’s test, they frequency-shifted a pulse carrying 24 bits of data. A second time lens at the end of the telescope then converted the compressed pulse back to its original state. But the second lens is stronger, creating a 24-bit pulse that is 1/27th as long as the original, shrinking the pulse duration to 92 picoseconds from 2.5 nanoseconds.

While all that sounds somewhat technical, the technology is essentially a simple telescope applied to fiber optic signals, but its potential is vast. If “time telescopes” were deployed across the optical networks that connect the entire globe, we could achieve data rates that dwarf the broadband we enjoy today. Using the same wavelength channels we are using now, we could pack 27 times more information with a decompression lag at the receiving end of only one millisecond. Even Ted Stevens won’t be able to complain about the pipes getting clogged at those speeds.