Technological advances have brought audio recording a long way over the past several decades, but, as with so many things,... 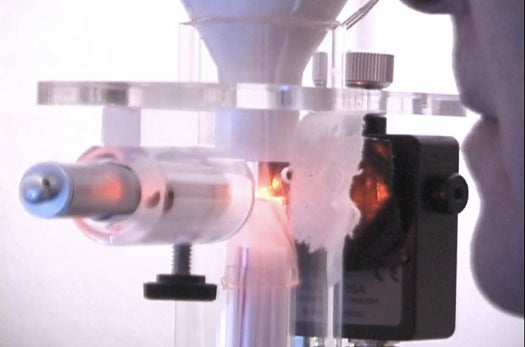 Technological advances have brought audio recording a long way over the past several decades, but, as with so many things, microphone recording is limited by the very technology that has pushed it forward. In this particular case, that limit is the diaphragm that converts sound into electrical signals by measuring vibrations made by incoming sound waves. Because each diaphragm has its own characteristics, all microphones are not created equal; and because the sound waves are converted by these diaphragms, there is always some degree of mechanical interference with the sound.

Enter digital audio innovator David Schwartz’s Laser-Accurate microphone. Using a laser to measure the deflections that sound waves make as they travel through a steady stream of smoke, this wholly new type of mike eliminates virtually all mechanical interference with the sound. That means crisper recordings, and more consistent sound quality coming out of the studio, though right now the device is still but a rough prototype in the lab.

Schwartz, the inventor of the mp3 format, is no stranger to pushing the technological envelope, but in this case the mechanics of his device are fairly simple and derived from existing technologies. A steady stream of smoke passes through a cylinder with holes drilled near the top where sound waves can enter. Intersecting the point where sound meets smoke is a laser beam that can detect movements in the individual smoke particles. As the particles are nearly weightless, they will more closely form to the original sound waves than an electronic diaphragm will. And presto: better sound quality, better consistency.

Naturally, as you can see from the videos, Kanye won’t be snatching a hand-held version of this technology from anyone for quite a while. But for studio recording, the concept is quite feasible. Schwartz hopes to show off a second, better-sounding prototype next month.