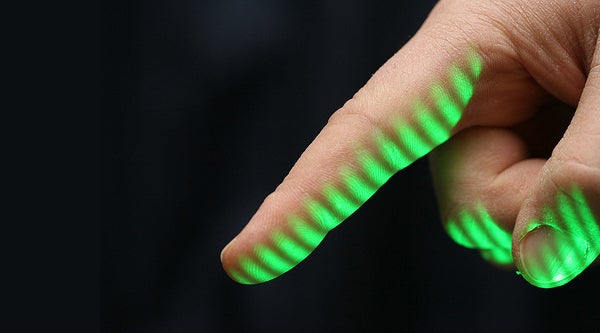 It's not ET, but it'll capture 3-D fingerprints with no touching necessary. University of Kentucky
SHARE

Fingerprinting with ink or even sensor plates poses a chore for everyone involved, except possibly 10-year-old kids. But that could change with a 3-D system that projects light patterns onto a finger and analyzes the image within a second.

The method works by beaming a series of striped lines so that they wrap around a finger. A 1.4 megapixel camera captures the lines at almost 1,000 pixels per inch, and creates a highly detailed 3-D map of the fingerprint ridges and valleys.

Technology Review reports that the new device has proved both more efficient and accurate than traditional 2-D fingerprinting. Ink fingerprinting has always been a painstaking and none-too-accurate process. Even modern scanners with glass plates often require several tries, and can take several minutes to capture prints from all 10 fingers.

This effort by University of Kentucky researchers represents one of several government-funded efforts to develop 3-D fingerprinting technology. The team hopes to eventually reducing processing time to less than 0.1 seconds, and scan all 10 fingers at all once — a likely boon for both customs agents and the FBI in the near future.

Such fingerprinting won’t necessarily help forensics teams in the field, even if law enforcement databases improve based on the new technology. But there’s always more CSI-style methods waiting to lift fingerprints left behind by perps.