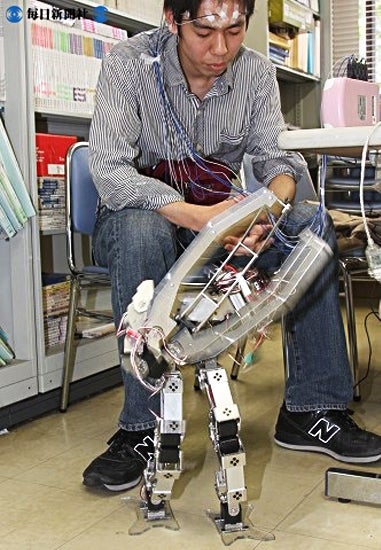 Future humans may look back on this mind-controlled stabbing robot as a forerunner to battle mechs and Gundams. But the one-armed stabber failed to win out in the latest Robo-One competition held in Toyama, Japan over the weekend.

The first combat robot controlled by neural signals arrived as the brainchild of Taku Ichikawa, a fourth-year student at the University of Electro-Communications in Tokyo. Its techniques for beating opponents comprise walking forward, rotating right, and using its single arm for stabbing.

Mainichi Daily News reports that Ichikawa controls the nearly 20-inch tall bipedal robot by using electrodes on his head that gauge his brain activity. The researcher originally developed the wireless control scheme for use with wheelchairs, so that users could command chairs using clear mental images. Such mental commands presumably establish a set pattern of neural signals that the electrodes detect and translate into the proper movement for chair or robot.

Novelty aside, the mind-controlled robo-gladiator can only carry out three commands such as walking forward, rotating right and using its arm to make stabbing attacks. Ichikawa tried to compensate for the control scheme’s limitations by installing onboard sensors that allow the robot to automatically get up from a fall, or open its clamp-like fingertips to menace approaching enemies.

It’s still a long ways from the responsive mobile suits or combat exoskeletons of science fiction, which may explain why a more conventionally controlled robot bested the competition. The combat tournament featured 32 robots fighting in 3-minute rounds, where robots that were knocked over three times were eliminated.

The ultimate robot champion featured walking and rolling capabilities along with double-fisted clamps and deployable blade-like flaps. Turning itself into a mobile walking chair for a nearby person just became the icing on the cake.