Long hoped to represent the point where superheavy elements don't immediately decay, Ununquadium turns out to be not so stable after all 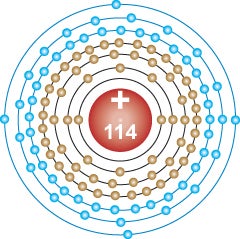 More than 10 years after Russian scientists first claimed to create atoms of Ununquadium, the unstable element in position 114 on the periodic table, scientists at Lawrence Berkley National Laboratory have confirmed their own element 114 sample. Unfortunately, the 114 atoms quickly decayed, dashing years of hope that element 114 occupied the long sought “island of stability” where super-heavy elements could exist in large quantities for long periods of time.

To clarify, this experiment does not represent the naming of the element, a process that can take over a decade, or the discovery of the element, which occurred at the Dubna lab in Russia, ten years ago. Instead, this experiment does manage to overturn years of nuclear physics, and send scientists back to the drawing board to recalibrate their theories on the heaviest of elements.

Super-heavy elements like 114 usually only exist for fractions of a second. Scientists make these elements one atom at at time by smashing together the nuclei of lighter elements. Those nuclei fuse together, forming a new, heavier nucleus of the larger element, before rapidly decaying back into lighter material.

However, nuclear physicists hypothesize that a magic number of protons and neutrons could produce enough binding energy to counteract the forces that tear apart the heavy nuclei, and render the new elements as stable as the common elements that exist outside of atom smashers. The physicists called these magic numbers the “island of stability”, because the elements with the numbers cluster together on the periodic table, flanked on all sides by ephemeral elements that dissipate in nanoseconds.

So far, no one has even imagined any practical uses for the super heavy elements that inhabit the island of stability. Rather, the search for these stable elements was best described by famed scientist Oliver Sachs, who, in a 2004 New York Times Op-Ed piece, noted that, “we search for the island of stability because, like Mount Everest, it is there.”

Scientists hypothesized that element 114 had that magic number, a hypothesis this experiment has disproved. Now the hope rests on elements 120 and 126, the next heaviest elements believed to contain the magic number of nuclear particles needed for stability.

[via The LA Times and The Knight Science Journalism Tracker]