First Solar just signed an agreement with China to build the biggest solar power plant yet, according to a statement... 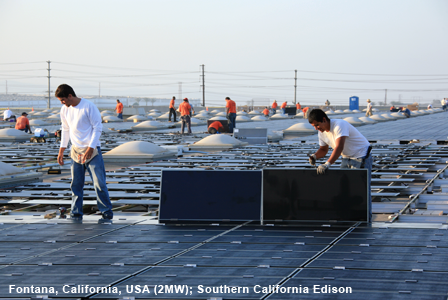 First Solar just signed an agreement with China to build the biggest solar power plant yet, according to a statement released today by the company. The 2-gigawatt plant in the Mongolian desert will generate enough electricity to power three million homes.

That’s a heck of a lot of cadmium telluride, the semiconductor they use for their thin film cells.

The largest solar plant currently in operation is a mere 60-megawatt plant in Spain, according to pvresources.com.

First Solar and China officially signed a memorandum of understanding, which is still up for final negotiations. The plan is to start building a 30-megawatt phase this summer, adding more and more until the final phase is complete in 2019.

Earlier this year, First Solar became the first company to produce solar cells at less than a dollar per watt, crossing the boundary thought to make solar power competitive with traditional energy sources.