Scrubbing sites of radiation is no easy task, not to mention costly. Aside from all the technical hurdles, the potential... 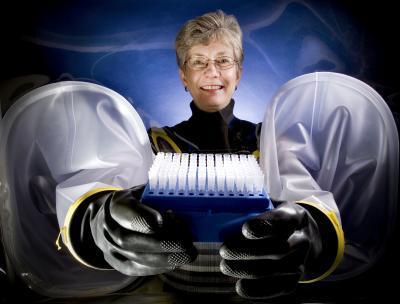 Scrubbing sites of radiation is no easy task, not to mention costly. Aside from all the technical hurdles, the potential health hazards drive up the cost further, making it feasible in only the most necessary of cases. But researchers at the University of Missouri have found a work force that may be willing to clean up our radioactive messes on the cheap.

Judy Wall, a biochemistry professor at the University of Missouri, has found that certain sulfate-reducing bacteria can convert the toxic forms of radioactive metals to inert substances, by altering the solubility of heavy metals. For instance, these bacteria can turn radioactive uranium to the nearly-insoluble form uraninite naturally, no Hazmat suit required. The radioactivity of the substances isn’t removed, but the metals are no longer chemically available to be absorbed by organisms that might be harmed by them.

With a tweak here and there, these bacteria could clean up abandoned uranium mines, industrial waste riddled with heavy metals and storage tanks where radioactive materials have been stowed. They also might be able to cleanse water of heavy metal pollutants. The bacteria are already present in more than 7,000 heavy metal contaminated sites, but there’s one tiny catch: the bacteria only live at highly specific levels of oxygen and temperature, making them a finicky work force to boss around.

Wall and collaborators from Lawrence Berkeley National Lab are working with the bacteria in a sealed environment to isolate genes in order to develop an oxygen-tolerant strain. The obstacles are many, but the team has already isolated a handful of genes critical to converting uranium. If successful, environmental authorities could potentially reclaim large areas long ago contaminated by mining and industry without the expense, or hazard, of putting human bodies to the task.