FYI: Is There a Scientific Way to Measure How Bad a Fart Smells?

You’re in luck. For their senior project, two Cornell University computer-engineering whizzes recently built a machine that does just that.... 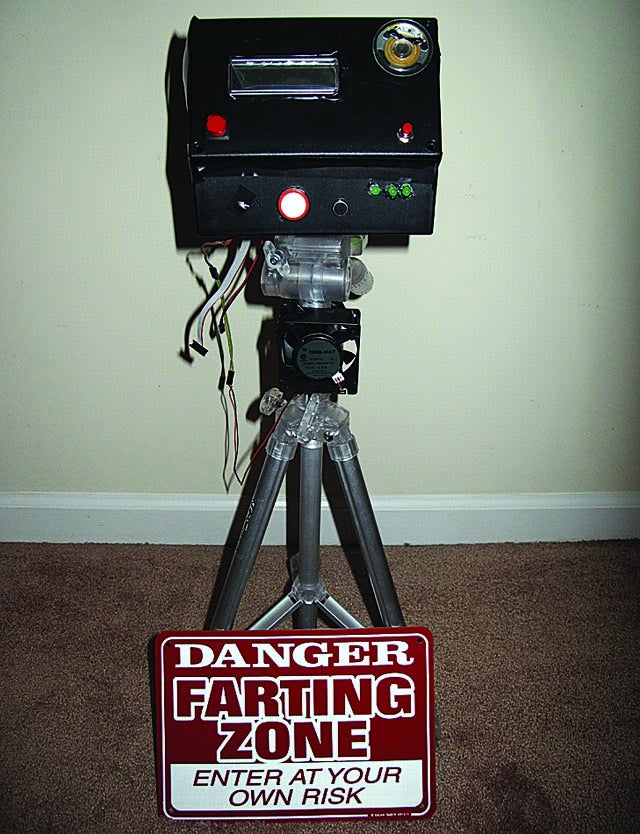 You’re in luck. For their senior project, two Cornell University computer-engineering whizzes recently built a machine that does just that. After learning in class how breathalyzers work, Robert Clain and Miguel Salas assembled a fart detector from a sensitive hydrogen sulfide monitor, a thermometer and a microphone and wrote the software that would rate the emission. A “slight perturbance in the air” near the detector sets it to work measuring the three pillars of fart quality: stench, temperature and sound. Temperature, Clain explains, is critical. The hotter a fart, the faster it spreads. “It beeps faster if it’s a high ranker, and a voice rates it on a scale of zero to nine,” he says. “If it ranks a nine, a fan comes on to blow it away. It even records the noise so you can play it back later.” After a few months of construction, they began field tests. “Well, the sample data wasn’t the entire school, but we definitely tested it,” Salas says.

The contraption could even have use outside of fraternity houses, Clain says, as a biosensor for harmful hydrogen-sulfide-producing bacteria in hospitals. Or dentists could use it to measure oral malodor. They’ve also received some interest from doctors with four-legged patients. “You can test the health of livestock through the quality of their farts,” Salas says. “Smell and sound can tell you a lot about their bowel movements.”

When it came time to present the invention in class, though, Clain and Salas had to test their detector by making raspberry sounds and breathing on it—human exhalations contain enough hydrogen sulfide to trigger the sensor. “It’s hard to fart something really smelly on command,” Clain laments. “Besides, it provided a nicer atmosphere for those around us.” Still, their professor saw fit to award the project a well-deserved A.

Ask Us Anything
poop
September 2009