Oh, Japan, you never cease to amaze. From the country that brought you water powered jetpacks, robots that make dinner...

Oh, Japan, you never cease to amaze. From the country that brought you water powered jetpacks, robots that make dinner and tentacles that do…other things, comes a floating UFO that will dutifully clean Osaka’s public waterways.

Designed by the engineering house NTT Facilities, these floating solar powered water processing plants will be deployed in Osaka’s Dotonbori canal and in the moat of Osaka castle. They remove pollutants from 2,400 gallons of water a day, sucking in the bad water through the bottom and shooting the clean water out the top like a fountain. Not only does the fountain look pretty, but the water spray cools down the solar panels, increasing efficiency. 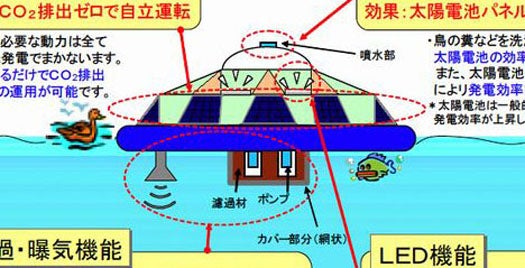 Duck not to scale

They are being deployed as part of a year-long effort to revitalize Osaka’s waterfront. The purifier in the canal will remain in place until October, and the one in the moat will float there until March of next year, after which it will presumably blast off back to its home planet.