Smallest Laser Ever May Herald the Future Of Electronic Devices

For decades, electronic devices have been shrinking, in accordance with Moore’s Law. Now, as circuits reach the size of single... 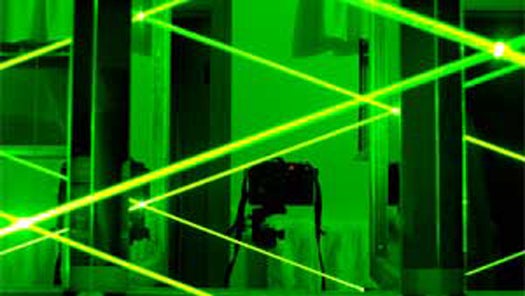 For decades, electronic devices have been shrinking, in accordance with Moore’s Law. Now, as circuits reach the size of single atoms, progress begins to bump up against the physical limitations of matter. Enter the spaser. This new kind of laser produces a beam so small that it could someday form the foundation of circuits made of light, not electrical impulses.

The spaser (surface plasmon laser) uses excited gold nanoparticles to produce a laser with a wavelength ten times smaller than that of visible light. The process, developed by Mikhail Noginov, a material scientist at Norfolk State University in Virginia, involves coating the gold nanoparticles in an organic dye.

When light hits the dye, it transfers that energy to a special class of electrons (the surface plasmons in “spaser”) on the gold particles. The plasmons then emit the laser-like light at an astoundingly small wavelength of 31 nanonmetres.

At that tiny size, the spaser energy emitted by the nanoparticles could be used to create circuits many times smaller than currently possible, which translates into computers thousands of times faster than today’s models. The scientists at Norfolk State University have already created spaser circuit elements, and estimate that they can assemble a completed circuit within a year.

Of course, a regular computer chip has thousands of circuits, so it might be a little while before anyone uses a laptop with a spaser processor. However, this is an important development in keeping the advance of computer power moving along despite physical obstacles. While previous speculation looked to quantum computing as the way to sidestep the size limit of circuitry, it looks likes the spaser may provide a more practical, and more quickly developed, answer to the vexing problem of shrinking circuits.

[via Ars Technica and Nature News]