For blind people who can’t perfect the system of clicks and whistles designed in Spain for human echolocation, researchers at... 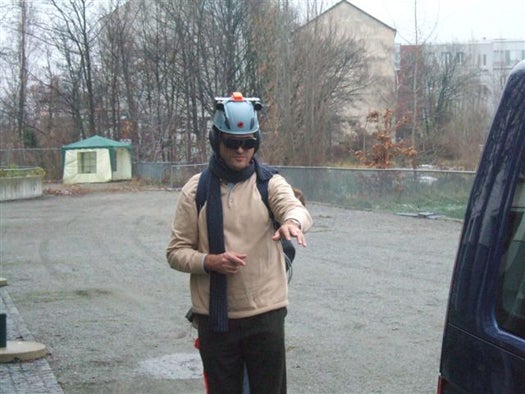 For blind people who can’t perfect the system of clicks and whistles designed in Spain for human echolocation, researchers at the University of Bristol in England have created a new solution: a helmet that automatically transforms a map of the surrounding area into sound.

The system takes real-time imagery of local obstacles, be they stairs, walls, or trees, as well as moving objects like cars and other people, and alerts the wearer using the sounds perfected in the Spanish echolocation system mentioned above.

The helmet uses stereo headphones to denote where the objects are relative to the wearer, and the volume of the sound indicates the distance. The device has a 60-degree range of vision, and can identify objects as far away as 15 feet. The researchers are also currently looking to integrate GPS data into the rig, so that users can use it to plot specific courses.

Unfortunately, the speed and distance limitations of the system mean it can’t pick up oncoming traffic, to prevent the helmet from leading the wearer into a busy intersection or other dangerous situation. As a result, the researchers need to do a bit more work before the system can hit the market. Also, looking at the picture, they might want to spend some more time on the looks of the helmet. May I suggest something sleek and white?

[via The Future of Things]