Mutant Mice Are Bred to Order

Some are fat, others tiny. And one is just having a bad hair day

Ever since Mario Capecchi, Martin Evans, and Oliver Smithies created the first knockout mouse in 1989, genetically engineered animals have steadily increased in popularity for all kinds of biology research: simply pick a gene, turn it off in the mouse, and see what happens.

Knockout mice are undoubtedly helpful animal models for many human genetic disorders. But there is still plenty of potential for discovery in mice that go through spontaneous mutations: indeed, these natural mutations can have high levels of complexity and diversity, leading to surprising phenotypes that give insight to human genetic disorders. Last week in at Jackson Laboratory‘s 50th annual Short Course in Medical and Experimental Mammalian Genetics in Bar Harbor, Maine, Popular Science got a peek at 150 of the Lab’s 10,000-plus mutant mouse strains.

Jackson Lab has one of the largest populations of spontaneous mutant mice in the world: out of the 10,000 or so total strains, over 500 came from natural mutations. The lab also has around 1,500 targeted strains, knockout mice that which were genetically engineered, and various flavors of regular, healthy mice.

For over 20 years, researchers here have conducted “deviant searches” at the lab, which help link specific genetic mutants to an appropriate area of research. Every two weeks, mice that differ physically or behaviorally from their littermates — usually anywhere from five to a few dozen — are pooled together. Jackson scientists look for mice that exhibit phenotypes (the observable characteristics of their genotypes) that are common to whatever disease or disorder they are studying, and take those mice back to their lab. This process has led to the discovery of hundreds of genes associated with genetic diseases or disorders. Some classic examples include diabetes and obesity mouse models, which led to modern-day metabolism research.

The characteristics of some strains are hard to detect in a photograph or video, like the Social Anxiety mouse, which hangs back from its brothers and sisters and has a hard time getting a date (poor things are often too afraid of contact to mate). But others have obvious physical or behavioral traits, like those in our gallery. 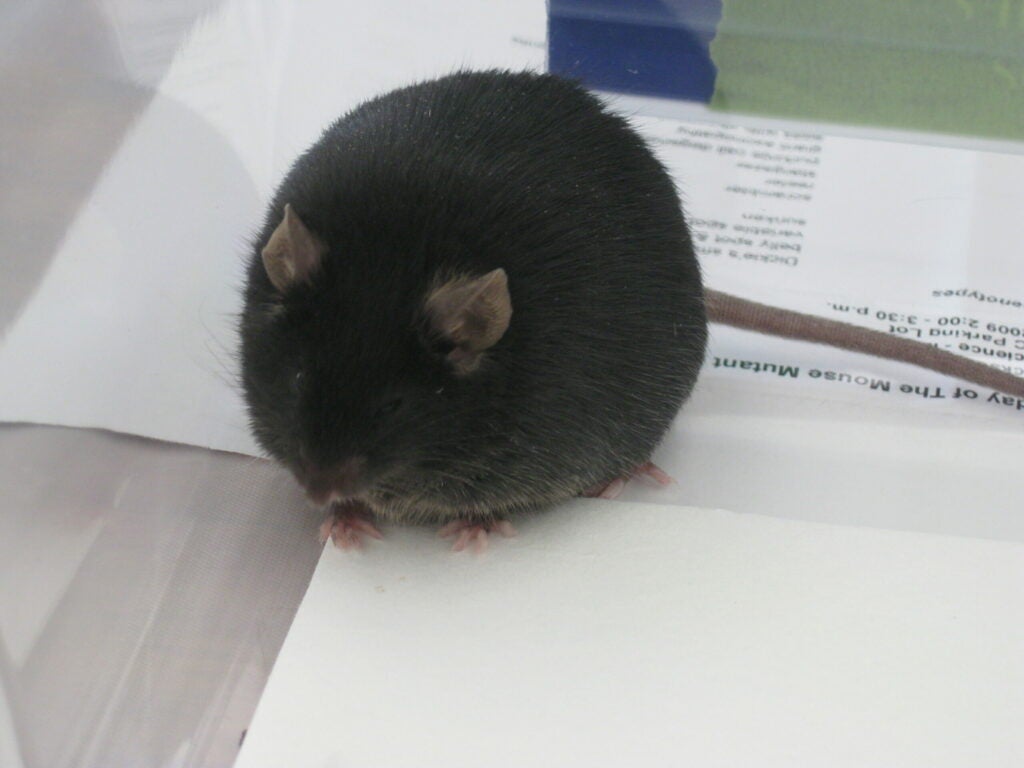 The Obese mouse may look awfully cute, but its condition comes with a litany of health problems. This strain can have diabetic-like symptoms, poor body temperature control, low fertility, impaired wound healing, and pituitary and adrenal abnormalities. Some of these mutants reach three times the weight of a normal mouse. Their obesity is caused by a spontaneous mutation that affects leptin, a protein hormone associated with metabolism, rather than a McDonald’s addiction. The obesity mouse is used as a model for a number of human ailments, including diabetes, obesity, endocrine deficiencies and fertility defects. 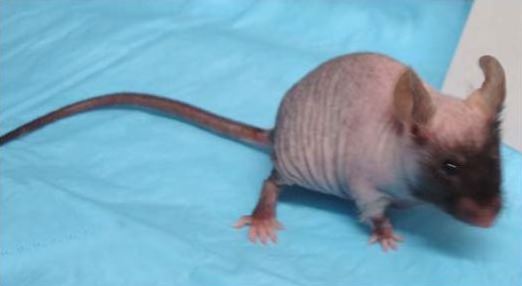 No amount of styling will help these mice out. They have a spontaneous genetic mutation that gives them bad hair for life: the Bad Hair Day gene. Depending on the combination of their alleles and their sex, these mice are either nearly bald, have patchy bald spots, or have thin, sparse hair. They aren’t used as animal models yet, but could someday be used in dermatology and developmental biology to study skin and hair texture defects. 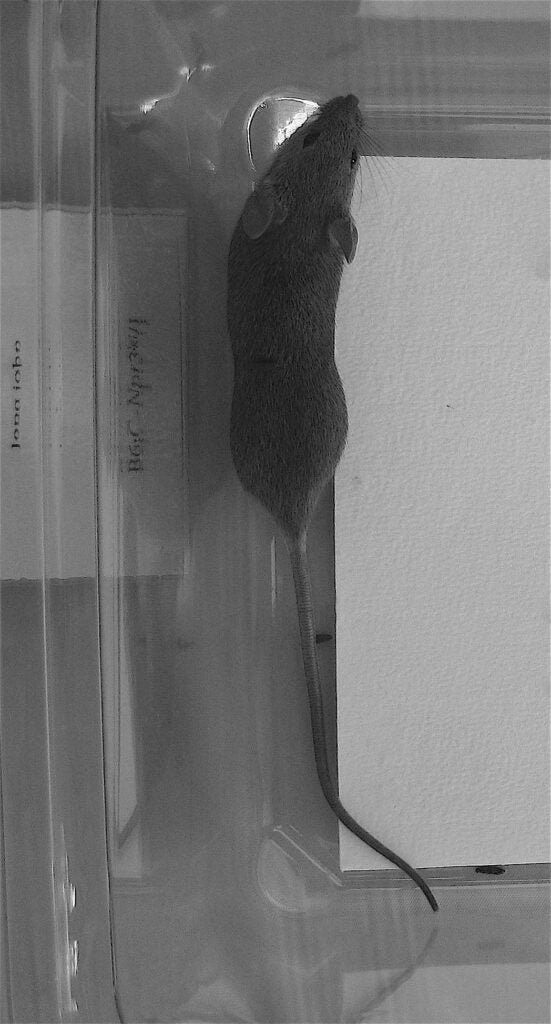 This long fellow comes from a strain of mice originally discovered at the Jackson Labs in 1979. The spontaneous mutation occurs on chromosome 15. The Long John mice have abnormally long bodies and can be used as a model for skeletal defects in humans. 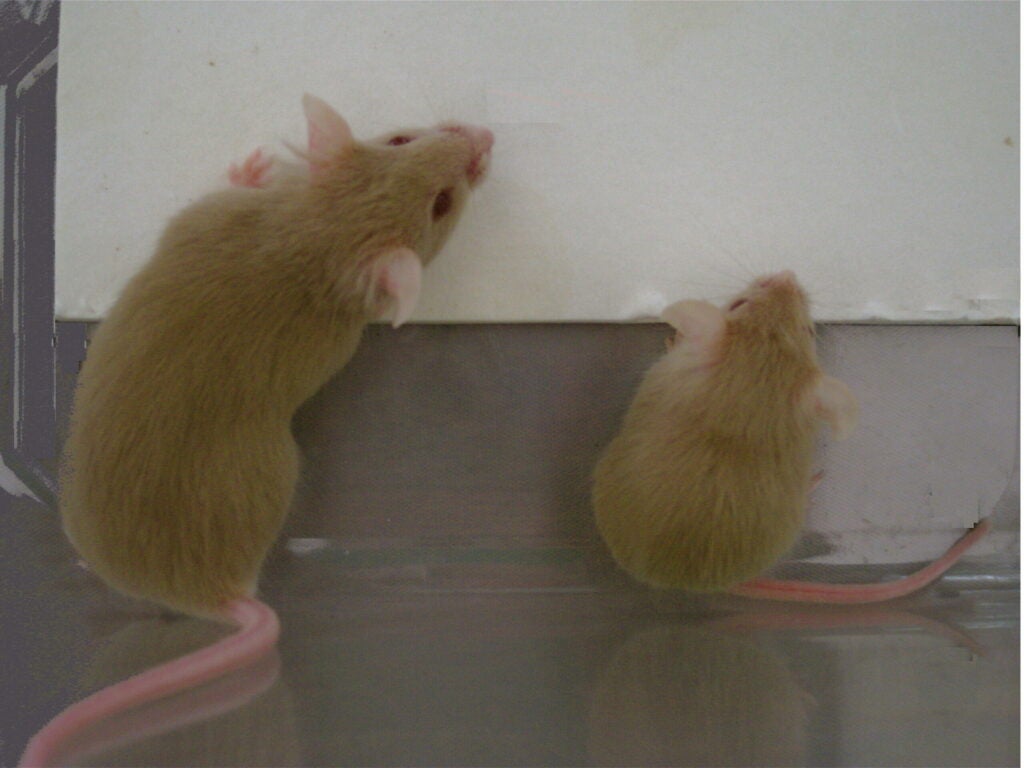 These two mice come from the same litter, but the small one on the right has a spontaneous genetic mutation that slowed its growth after it was just one week old. At two months, the Ames dwarf mutants are half the size and weight of their brothers and sisters, likely because they lack growth hormone. Females with the mutation are always sterile, as are most males. The Ames dwarf mice are used as models for several diseases and disorders, including growth defects, hypothalamus and pituitary defects and pituitary hormone deficiency. 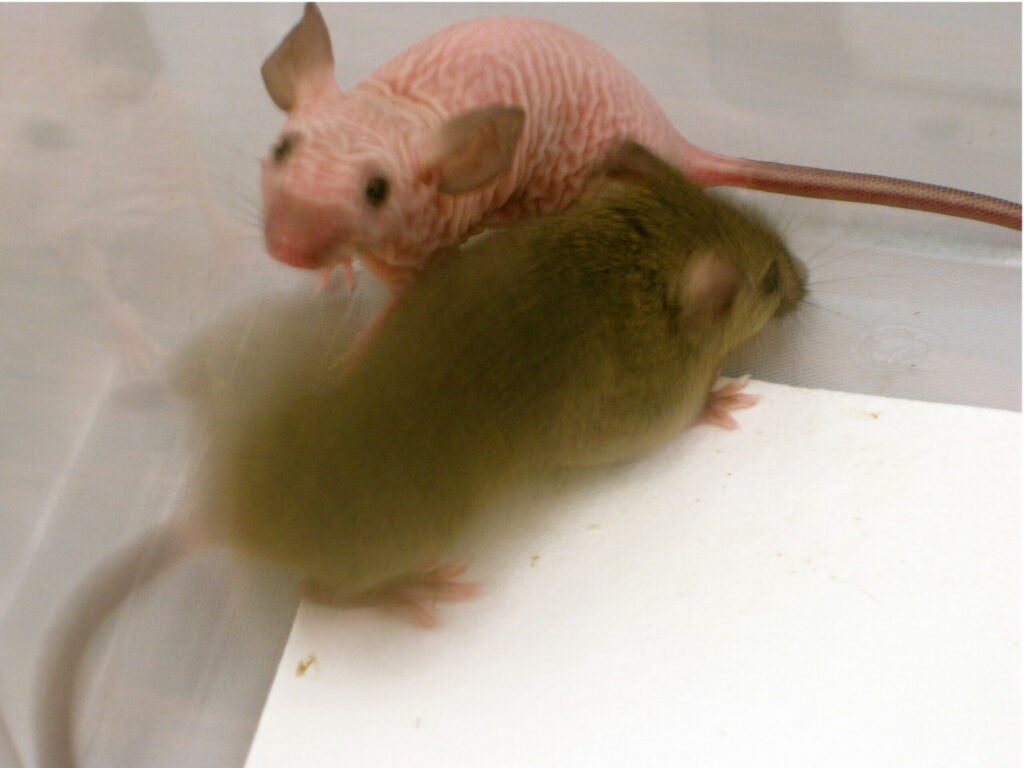 This strain results from a targeted mutation, rather than a spontaneous one, where the Hr gene is knocked out. The mice look normal for the first two weeks of their life. But then all their hair falls out, never to come back, and their skin progressively thickens and wrinkles. This strain may be a good model for studying skin and hair. Here, it is pictured with the Shiverer mouse, which is in the middle of a hind-leg spasm. 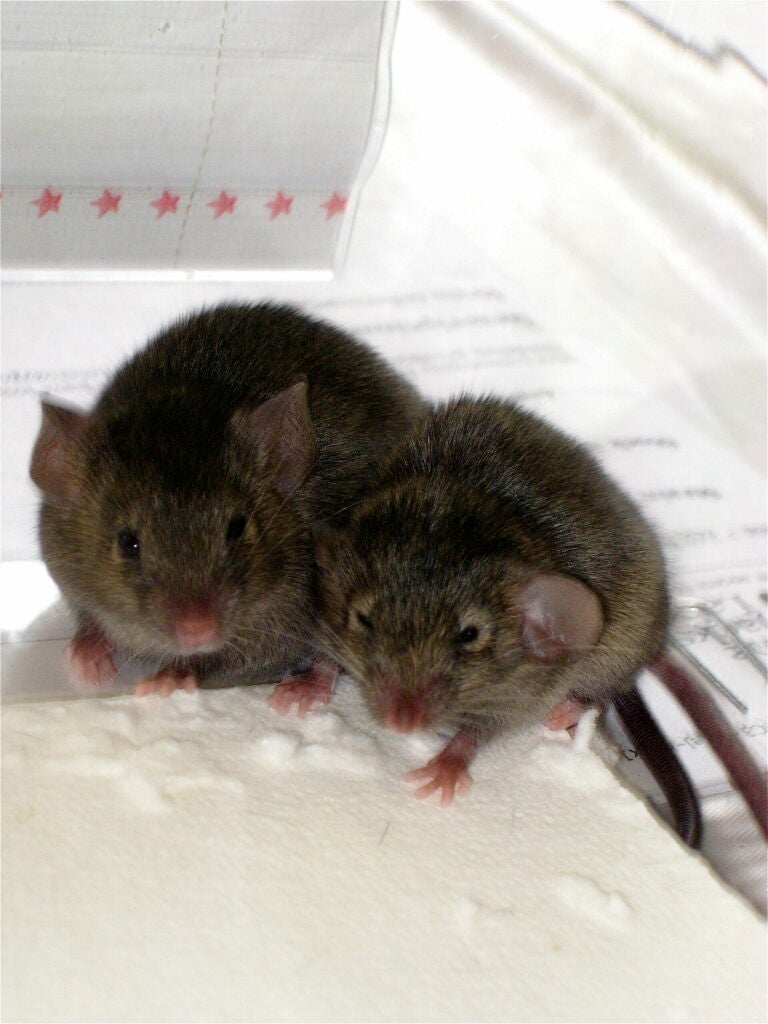 The rather adorable mouse on the right, which I like to refer to as the Fievel Mutant, has a mutation in the Hmx1 gene that causes the ears to grow out of the side of the head, rather than on top. Mice with this genetic mutation can be used as animal models in developmental biology research. The same genetic mutation in humans is associated with Oculoauricular Syndrome, a congenital condition that includes low-set ears among its characteristics.