While Hollywood focuses on robots several times taller than humans, some researchers are building tiny robots that could fit on... 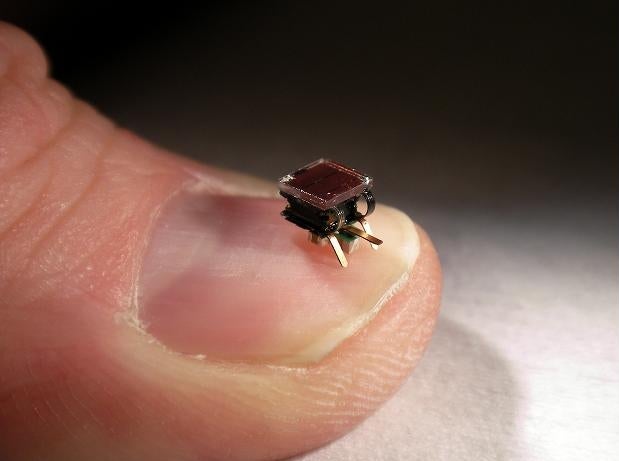 While Hollywood focuses on robots several times taller than humans, some researchers are building tiny robots that could fit on your fingernail. These microbots would work in swarms to collect data for a variety of applications, such as surveillance, micromanufacturing, and medicine.

The researchers, from institutes in Sweden, Spain, Germany, Italy, and Switzerland, use a novel approach to allow robots to be built cheaply and in large quantities. Working on a limited budget, they built an entire robot on a single circuit board.

Single-chip designs have previously been hard to design and manufacture. However, instead of soldering the components together using conventional methods, the researchers used conductive adhesive to attach different modules to a flexible printed circuit board using surface mount technology. They then folded the circuit board to create the robot.

Different modules allow the robot to communicate, move, store energy, and collect data. The tiny robots, less than 4mm in any direction, contain a solar cell on top for power, and vibrating legs, three of which they use to move and one that acts as a touch sensor.

A single robot wouldn’t be able to do much by itself. However, the project is based on the concept of I-SWARM (intelligent small-world autonomous robots for micro-manipulation), inspired by the behavior of insects. According to this concept, a large number of these robots, interacting with their environment and able to communicate with each other using infra-red sensors, could mimic the swarm intelligence of insects like ants.

The researchers hope to improve the fabrication techniques, particularly the efficiency of adhesion, and to automate the process of folding the circuit board. With further funding, they aim to mass-produce these tiny robots. Unlike some previous attempts, the researchers hope that their methods will allow them to manufacture enough microbots to truly mimic insect behavior and swarm intelligence.