Not bad for a microbe 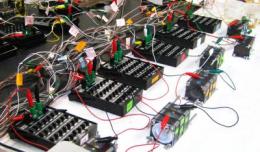 Desalinization technology has long been trapped between two competing nightmare scenarios. Without desalination, fresh water resources run out and large swaths of the earth suffer crippling water shortages. But if we desalinate on a large scale, we keep burning fossil fuels, the earth warms, the ice caps melt, and sea levels rise to wreak havoc on coastal regions.

Desalinization could theoretically solve the impending water crisis if it weren’t such an energy-intensive process; desal requires large amounts of electricity, which is primarily generated by burning fossil fuels. Call it a catch-22. But researchers at Penn State think they’ve solved the problem by creating a process that cleans wastewater while generating electricity, simultaneously removing 90 percent of salt from seawater.

Current desal methods — which either employ reverse osmosis to push high-pressure seawater through salt-extracting membranes, or electrodialysis to pull ions out of water using electricity — require a great deal of power. The Penn State team has sidestepped the problem by custom-tooling a microbial fuel cell to desalinate saltwater. While the system is not yet optimized (it currently uses 200 milliliters of wastewater to desalinate 3 milliliters of saltwater), the fact that it’s possible could spell a breakthrough in sustainable technology.

Microbial fuels cells convert chemical energy to electrical energy by tapping the electron exchange between two chambers. In the anode chamber, oxygen-starved organic material — in this case, wastewater — is oxidized by naturally occurring bacteria (though researchers are genetically tooling even more efficient bacteria in labs). This releases protons and electrons, from which the fuel cell extracts electrical power. The researchers placed a third chamber in between the anode and cathode, separating the central chamber from the other two with ion-specific membranes that allow either positive or negative ions to pass, but not both.

The salt water goes into this central chamber, and this is where the magic happens. When salt dissolves in water, it dissociates into positive and negative ions. As the microbial fuel cell polarizes (electrons gather on the cathode side, protons at the anode), the protons try to flow through the center chamber, but cannot pass through the anion membrane. The membrane will, however, let negative ions pass out of the saltwater into the anode chamber. The opposite happens at the other end, as positive ions pass from the center chamber to the negatively charged cathode chamber. Left in the middle: nearly salt-free water.

As the icing on the cake, the release of ions into the anode and cathode from the salt water actually improves the fuel device’s efficiency over standard microbial cells. The byproducts of the process are cleaned wastewater and salt, which can be dumped safely back into the ocean. While far from emerging on a commercial scale, an optimized process could treat wastewater and create drinking water, all while generating electricity — scoring a trifecta of sustainable tech in one neat little package.