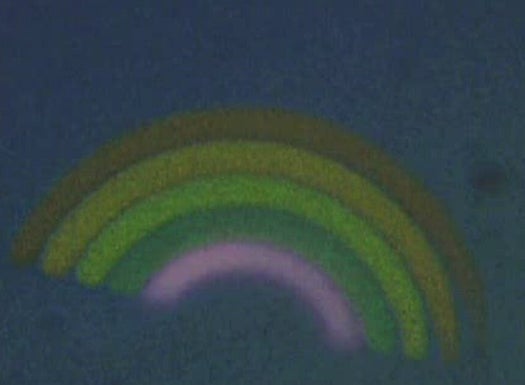 Traditional color printing — whether done with an inkjet, laser or silkscreen — requires a page to be laid out with several different inks in various colors to produce a full color image. But Korean engineers have developed a different process using a single nanoparticle-imbued ink, which could produce color prints in fractions of a second.

The new ink, called M-Ink by its developers, creates colors by changing its physical structure rather than by having a unique pigment. Like many colors in the natural world (the iridescence of a butterfly’s wing, for example) the same M-Ink can appear as different colors depending on the way light reflects off of its structural patterns. Magnetic nanoparticles in the ink can be manipulated to arrange themselves in different ways, instantly creating any color in the visual spectrum.

In the ink, particles 100 to 200 nanometers wide are suspended in a resin. When a magnet is applied, the particles snap into place in chain-like structures. Changing the magnetic field strength changes the color reflected by the ink.

Exposed to UV light, the resin hardens and the particles are locked into the pattern of a particular color. By using a technique called maskless lithography, where a narrow beam is directed over only one part of the ink, it is possible to expose some of the image in a single color and then adjust the magnet to add another shade, and another, to create a full-color image.

The prototype system takes a few seconds to print a letter-sized color image. But the researchers report that it should be possible to make the system work in less than a second.