And you thought your connection was fast. NASA’s Lunar Reconnaissance Orbiter is currently scanning the moon with powerful sensory equipment,... 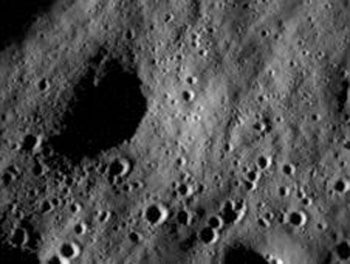 And you thought your connection was fast. NASA’s Lunar Reconnaissance Orbiter is currently scanning the moon with powerful sensory equipment, gathering the most detailed data to date from the lunar surface. But to transmit all those images and data across the 238,800-mile void separating the moon from Earth, the LRO relies on a super-charged wireless connection that beams 461 gigabytes per day back to the blue planet. And the instrument that makes it all possible is a mere 13 inches long.

Built by L-3 Communications Electron Technologies and NASA’s Glenn Research Center, the Traveling Wave Tube Amplifier uses electrodes mounted in a vacuum tube to amplify microwave signals, juicing them up for the long journey to NASA’s White Sands Test Facility in New Mexico. There, geographic and climate data is picked up by a Ka band antenna network and downloaded to scientists constructing high-resolution 3-D maps and models of the lunar surface.

Traveling wave tube amplifiers have been used on previous missions like Cassini and Kepler, but those incarnations of the device were far less powerful. The LRO’s amplifier hits transmission speeds of 100 megabytes per second, allowing it to constantly stream data to the ground, where it is received in nearly real time. By comparison, a typical high-speed Internet connection often tops out around 3 megabytes per second. The new TWTA is also more compact and lighter, freeing up payload for other scientific instruments.

While a high-speed connection to the moon ensures future colony dwellers will still be able to catch 30 Rock via Hulu, the technology has far greater implications. Unlike most technologies that debut terrestrially before reaching toward the stars, the LRO mission is essentially the pilot project for the new TWTA technology. Now that the tech has cut its teeth on a NASA mission, integrating it into future Earth-orbiting satellites should be easy enough. Communications satellites equipped with the tech could better monitor transoceanic flights and ships that have passed out of radar range. Moreover, research satellites with such rapid download speeds could better predict weather and help scientists understand climate change, and, in the case of natural disasters, even aid in search and rescue operations, saving countless lives.