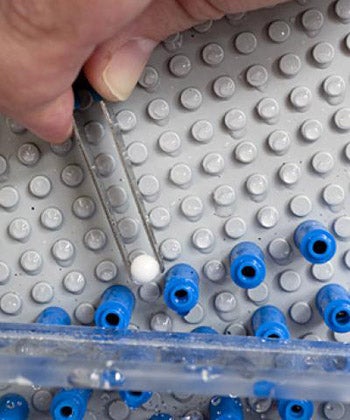 Whoever thinks science isn’t fun must have never heard of Legos. The colorful construction toy has been used before as a cellular teaching tool. But these days, even researchers working in the nanoscale world get to play around a little.

Johns Hopkins engineers are now using Lego to visualize what is (or might be) happening on scales much too small to see with the naked eye or even to watch dynamically with a microscope. Specifically, they are building blown-up models of a lab-on-a-chip to watch and test the dynamics at work in those minuscule machines.

Their Lego model consists of a stiff base sheet with columns and rows of round barrel pieces stacked two high. The board — immersed in a tank of glycerol and pressed against the side — is a large-size version a certain type of lab-on-a-chip, or microfludic array, which acts a separator or tiny filter.

How can a big old Lego board with those funny little round barrel-pegs stuck all over it behave anything like a nanoscale lab-on-a-chip? The researchers report that for what they are looking at, size doesn’t really matter. The interplay between particle and obstacle — tiny ball and Lego peg, or molecule and lab-on-a-chip — occurs on small and large scales in much the same way.

Dropping a variety of steel and plastic balls through the grid in the glycerol tank, the group videotaped the balls’ path. As they turned the sheet and changed the angle of the rows of barrels, they observed that the larger spheres didn’t fall through randomly — rather, their paths could actually be reliably predicted.

The researchers report that such predictability could be re-engineered back into new microfluidic arrays to make them sort items by size or roughness. In the meantime they have to test how other factors influence the system, like the density or frequency of the particles being sent through.

Pretty cool for fun and gamess. I would have probably just made a helicopter.