It’s been said there’s no accounting for taste, but if Japanese researchers have their way, there soon will be. Research... 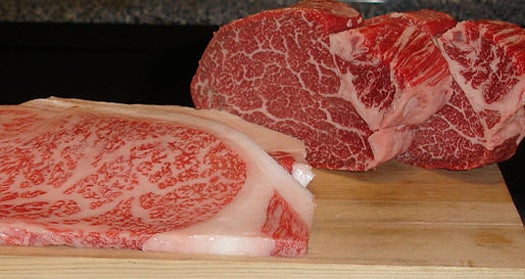 It’s been said there’s no accounting for taste, but if Japanese researchers have their way, there soon will be. Research initiatives underway in various corners of Japanese agriculture will remove taste from the subjective realm and create objective standards for flavor that consumers can use as a yardstick–without ever having tasted a product at all.

The overarching goal is to increase the added value of certain food products by offering proof not only of a food’s origin, but of its actual superior flavor. For instance, in Nagano Prefecture, a designation has emerged for “Shinshu premium beef.” The kuroga-wagyu cattle that produce Shinshu premium are the same that produce other Wagyu beef, but the Shinshu premium is held to a higher standard of flavor and texture.

Previously, producers and restaurants had no way of quantifying (and charging more for) the superior nature of these cuts of wagyu. The prevailing method for determining beef’s flavor involved making a visual assessment of its marbling, quantified on a 12-level scale known as the beef marbling standard, or BMS. But naturally, taking visual stock of taste has proven ineffectual, as some beef shows exceptional marbling, but lacks that extra melt-in-your-mouth oomph needed to elevate it to Shinsu level.

This new system, introduced earlier this year, is the first trial in Japan in which chemical composition will be used to determine flavor, but others are in the works. Niigata Prefecture, famous for its Koshihikari rice, is using protein levels in rice to establish a standard for taste. Under increasing competitive pressure from rice varieties from other regions, Niigata is hoping to set itself apart by showing customers that rice from its paddies contains less protein, and is therefore softer and more glutinous, two important contributors to rice flavor.

Technologies are developing alongside the demand for better quantification for taste in Japan. Prof. Kiyoshi Toko of Kyushu University’s Faculty of Information Science and Electrical Engineering, in collaboration with other researchers, has developed a taste sensor that quantifies foods’ saltiness, savoriness, sweetness, acidity, astringency, body, and aftertaste.

“We’ve often had to predict the taste of food from such information as price and where it was produced,” Toko told Japan’s Yomiuri Shimbun. “There will come a time when many different elements affecting taste will be quantified and consumers will chose products based on those standards.”