What do you do when you’re under attack? Call for help, naturally. Unfortunately, if you’re an ear of corn, and... 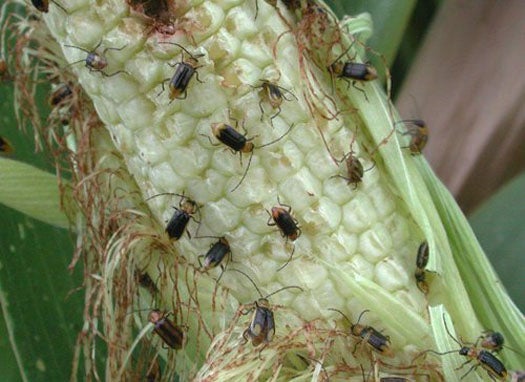 What do you do when you’re under attack? Call for help, naturally. Unfortunately, if you’re an ear of corn, and you’re being attacked by parasitic beetle larvae, you have nothing to call for help with. Until now.

Scientists at the University of Missouri have genetically modified corn to release a chemical distress signal when under attack from beetle larvae. The chemical 911 call attracts droves of parastitic roundworms that naturally attack the larvae. Within three days of receiving the distress signal, the worms had killed them all.

Originally, all corn made the worm-attracting chemical. However, years of selective mating bred that trait out of the corn grown in the US. To give the corn back its emergency chemical, the scientists inserted a gene from oregano that produces a similar compound to chemical excreted by wild corn.

Currently, there is no plan to introduce the worm-attracting corn commercially, as the scientists are still working on the right cocktail of chemicals to attract the right kind of organisms. However, with rising public outcry over pesticide secreting GM crops, and up to a billion dollars of beetle larvae damage in the US every year, a solution that protects the corn without any harmful pesticides would no doubt attract eager customers and protective worms in equal measure.

[via National Geographic and Nature News]