In 1764, a cartoon showed Benjamin Franklin wearing the first pair of bifocals, and not a lot has changes since... 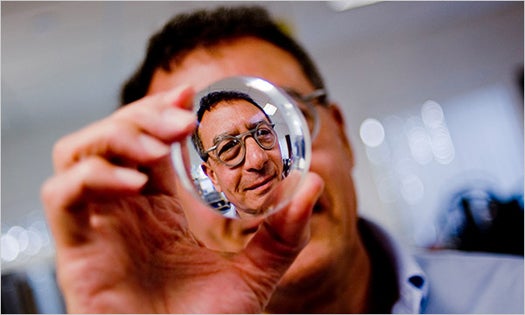 According to The New York Times, inventor Stephen Kurtin has developed the first manually adjustable lenses that let the wearer adjust from long distance to short distance viewing at the flip of a switch. The secret is a layer of liquid within the lens that changes shape depending on the situation.

Called TruFocals, the glasses are composed of two components, a rigid plastic or glass lens, and a clear liquid that also acts as a lens. A slider on the top of the frame’s bridge compresses the liquid, changing the shape and focus of the liquid lens, and thus the distance of focus for the wearer.

There have been other adjustable lens glasses created before, including the winner of a PopSci Best of What’s New Award in 2000. But those lenses had adjustable prescriptions, and did not toggle between long and near vision for a single user.

The glasses retail for $895, but they are just the beginning. As soon as next year, a company called PixelOptics hopes to release glasses that perform the same function as TruFocals, but do so using an electric impulse that alters the refractive index of the lens. Looks like the adjustable glasses market just got a lot more crowded.