In the recent Robocup 2009 games, in which robots compete for prizes and glory, entrants from many nations held their... 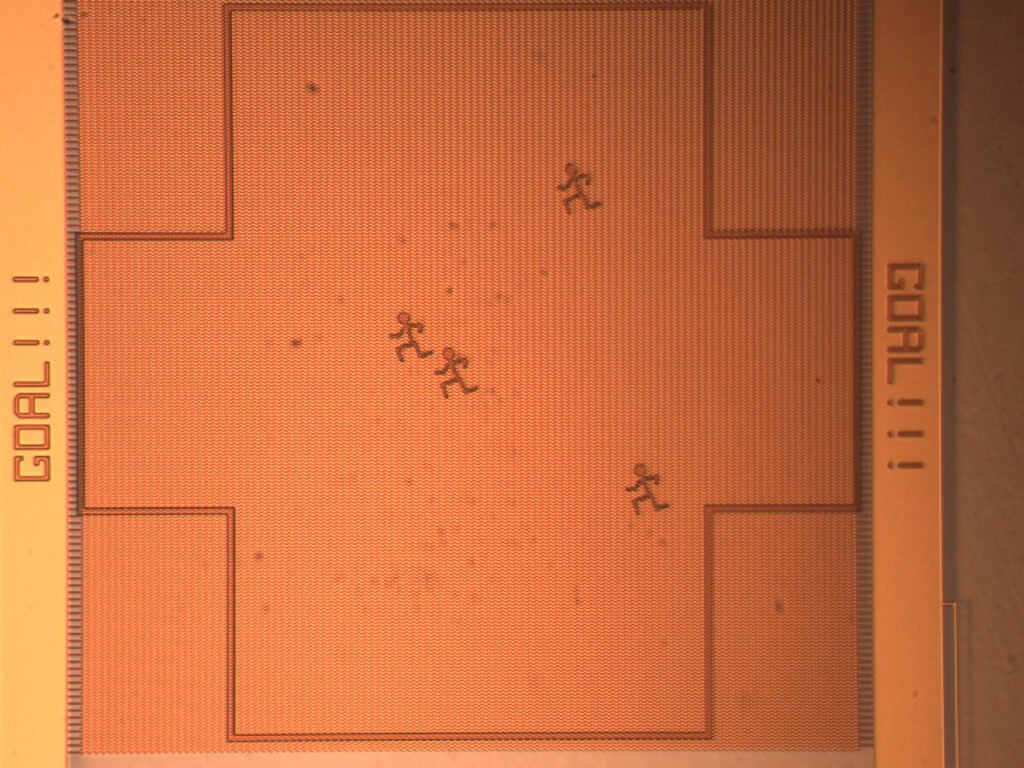 In the recent Robocup 2009 games, in which robots compete for prizes and glory, entrants from many nations held their own. In categories including small, medium, humanoid, 2-D simulation, and 3-D simulation, teams from the U.S., China, Germany, Iran, and quite a few other robot-producing countries played and won.

However, on the smallest playing field of all, there was one clear winner.

Haven’t heard of nanosoccer? As the “nano” in the name suggests, this is soccer on an infinitesimally small scale. In fact, it’s so tiny that a glass microchip with four nanosoccer playing fields measures 1.2 inches across, or just a hair more than the diameter of a quarter.

The athletes, in this case, are computer-driven nanobots, which are comparable in size to dust mites and weigh as little as a few nanograms. These nanobots are placed on a playing field that’s located under a microscopic lens and covered with conductive electrodes, from which the nanobots draw their power and receive their instructions. Human operators watch the bots through microscopes and use remote controls to direct their moves via changing magnetic fields and electrical signals.

Earlier this month, the two finalist nanobots — Magmite “the Twinjet,” operated by ETH Zurich, and the U.S. Naval Academy’s USNA — had a face-off at the Nanogram 2009 demonstration at the RoboCup games in Graz, Austria. The bots competed in three events, namely the two-millimeter dash (a goal-to-goal sprint), the obstacle course, and the ball handling drill (video below). According to the results, Zurich’s Twinjet won by a landslide. (It also has the better name.)

Not just an awesome spectator sport, nanosoccer also serves a practical purpose. The U.S. Department of Commerce’s National Institute of Standards and Techonology (NIST) organizes the yearly event as a means to shed more light on maneuverability and other skills that future industrial nanobots will need in order to complete tasks like microsurgery.