If you find an individual with exceptional talent, why not clone it? That’s an idea that may no longer be … Continued 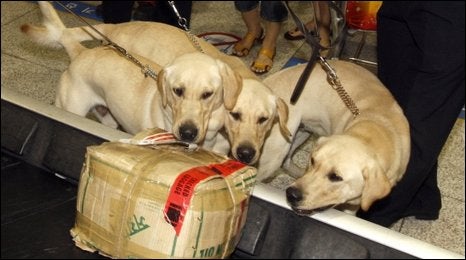 If you find an individual with exceptional talent, why not clone it? That’s an idea that may no longer be confined to the realm of science fiction, at least for dogs. South Korea’s customs service has now deployed the world’s first cloned sniffer puppies for hunting smuggled drugs.

Just 30 percent of natural-born sniffer dogs can normally pass the required training, but South Korean scientists hope that they can improve that to 90 percent by cloning best-of-breed dogs.

Six well-trained puppies were cloned from a star drug-sniffing Canadian Labrador retriever in 2007. A seventh puppy from the same litter dropped out of the 16-month training program due to injury. Three of the clone pups are now walking the beat at Incheon International Airport, and one each is deployed at customs offices in Incheon, Gimpo, and Daegu.

“They showed better performances in detecting illegal drugs during the training than other naturally born sniffer dogs that we have,” said Park Jeong-Heon, a customs spokesman at Seoul’s Incheon International Airport, during an interview with Agence France-Presse.

The clone siblings all share the name Toppy, a 1930s-esque word play on “tomorrow” and “puppy.”

Scientists at Seoul National University, who claimed the world’s first cloned dog in the form of an Afghan hound, carried out the $239,000 cloning project. They also assisted in cloning a 9/11 rescue dog, although that German shepherd was cloned more for sentimental reasons than for its talents.