USB 3.0 ports will start arriving by the end of this year. Here's what you need to know 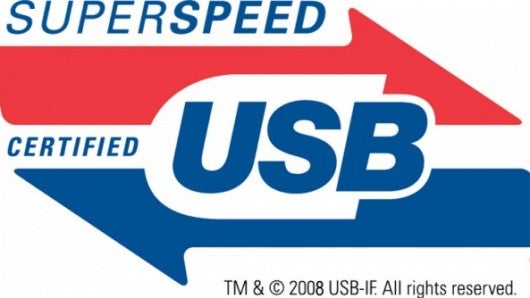 That Universal Serial Bus port in your computer is about to get an upgrade. You know, the one where you plug in all your external hard drives, digital cameras, MP3 players, thumb drives, and USB heated-slippers? If you bought your computer any time after the year 2000, it probably came equipped with a USB 2.0 port. However, later this year computers will start shipping that include USB 3.0 ports, which can transmit data up to ten times as fast. Here’s what to expect.

Dubbed “SuperSpeed,” USB 3.0 is much faster at transferring data than its predecessor. The current 2.0 ports can transfer packets of information at speeds of 480Mbit/s, but the 3.0 spec will be able to handle 4.8 to 5Gbit/s. This tenfold increase in speed is accomplished by increasing the number of wires used for transfer from 4 to 9 and more efficient handling of the traffic throughout the data bus. This large flow of information can also be split into several different streams of information being transferred at once.

USB ports can transfer not only information but also electricity to peripherals, which has yielded many kooky results. While energy transfer is nothing new in USB ports, the new version will help conserve energy. As it stands, USB connections are not specialized, and information packets are broadcast to all peripherals attached. The new ports and cables, however, will target the necessary device and send packets only to the devices that need to receive them. That allows conservation of power on portions of the cable that are not being used.

The best part is backwards and forwards compatibility. New cables will work in old ports (although not with the increased speed), and old cables will work in new ports. When confronted with disparate ports and cables, the computer will initiate polling to decide what the highest speed is that both ends can support.

Of course, there’s the increase in speed of packet transfer. That’ll mean faster uploads of photos or MP3s to and from your cellphone, and drastically better performance for USB mass storage devices like external hard drives. There’s also the potential for hi-def streaming: 5Gbit/s speeds offer the ability to cleanly stream video at 1080i definition. The process is also scalable for any future developments that Moore’s Law will throw our way: USB 3.0 was made in preparation for future computing.

Taiwanese PC manufacturers claim they will start shipping 3.0-compatible computers by the end of this year. However, it’s estimated that these initial models will only be able to reach about a quarter of the port’s potential speed. The technology will evolve over time to reach its maximal rates. Meanwhile, the port will become much more ubiquitous: About 140 million units will be produced in 2011 and up to 340 million units by 2012.