NEC and Rohm are going back and forth on new engineering breakthroughs that will allow integrated circuits inside chips to... 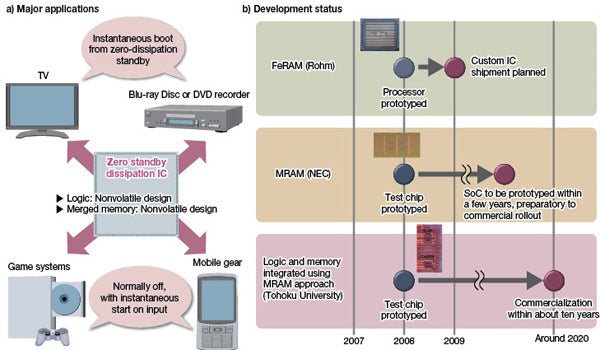 NEC and Rohm are going back and forth on new engineering breakthroughs that will allow integrated circuits inside chips to consume no power when they’re briefly inactive between cycles. And unlike most chip-level developments on the edge, we may see the technology in consumer products by the end of the year.

Rohm plans to start shipping their design this year, with products possibly appearing before the end of 2009. NEC plans to release a System-on-a-Chip prototype some time this year as well.

Many of our electrical devices suck up power even while they’re “off.” Same goes with the circuits that make up our processors–even while fully powered-on and working, there are brief intervals of inactivity when individual circuits in the system are at rest between cycles. The new chip designs differ in that they don’t require the inactive portions of the circuit to receive full power at all times, allowing for more efficiency both during use and in a traditional “standby mode.”

In addition, Rohm says the design could have major effects in the gaming arena, where power consumption is dependent on player input. As far as overall power consumption goes, this could have an effect on the power used for something like turning on a TV, where several watts are “leaked” in the process. It could also help improve operating power efficiency, and allow for smaller chip designs.

[via TechOn via Engadget]