Following the first U.S. double hand transplant, Jeff Kepner is the proud owner of a brand-new pair of lunch hooks 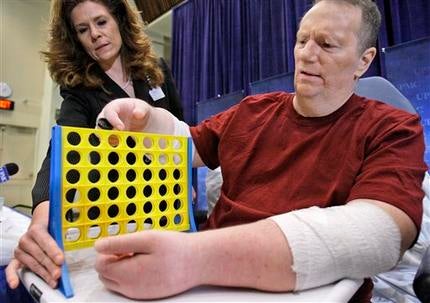 Imagine going for a decade without any hands and then suddenly having a new set to work with. That’s what happened to Jeff Kepner, the first person to receive a double hand transplant in the U.S.

Kepner lost both his hands and feet from a bacterial infection about a decade ago, but was supposedly ambivalent about the surgery, after hearing reports of previous attempts failing due to rejection. With a little persistence from his wife, and some convincing from the head surgeon about new anti-rejection techniques, he agreed to try it. The transplant required 21 surgeons working in groups of four on each arm to attach the new hands.

Now, more than 2 months after the surgery was performed, Kepner displays no signs of rejection. He has only limited use of the new hands, because the muscles are still stiff. He can slightly squeeze a tennis ball, move stacks of cones around, and even play Connect-4. He’s got a ways to go, though, as the nerves only regrow at a rate of about an inch per month. But in a few years, he might be able to function as he once did over a decade ago.