I was always told that learning a skill like juggling or playing an instrument requires three things: practice, practice and... 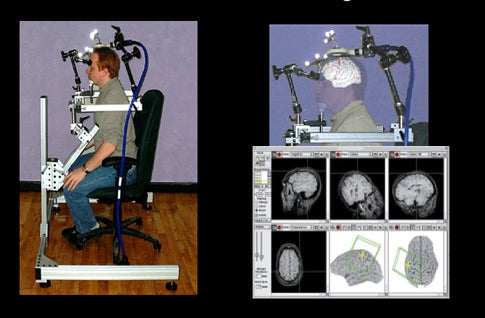 As detailed in a new study in the journal BMC Neuroscience, direct electromagnetic stimulation of the brain speeds up the fixation of simple motor skills. And while this system won’t help a healthy person jump from chop sticks to Rachmaninoff in a weekend, it can speed up the rate at which stroke victims recover basic motor function.

“If you practice a motor skill of any sort, you’re exciting a set of neurons,” said Lara Boyd, a professor at the University of British Columbia and the lead author of the paper. “We’re warming the neurons up. We’re preparing the brain to learn.”

And to prepare the neurons to learn, Boyd stimulates them with very targeted magnetic fields. The fields instigate activity in the target neurons, giving those neurons a running start for forming new connections to other neurons.

In the study, Boyd found that for 30 minutes after magnetic brain stimulation, test subjects learned to trace a pattern on a computer significantly faster than their non-stimulated counterparts.

And while that’s not enough to convince me to put my head next to the microwave before I practice the piano, the evidence is striking enough to convince Boyd both that the technique has promise for victims of brain damage and that she should start trying this technique on other areas of the brain.