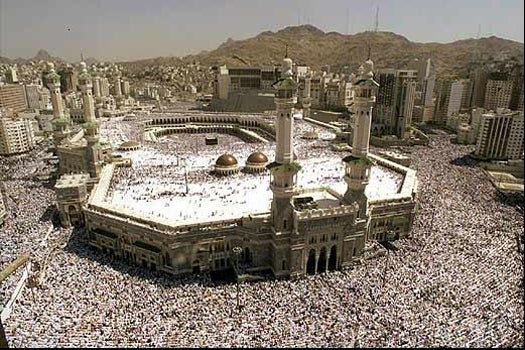 The Hajj, a journey to Mecca that retraces the steps of Mohammed, is one of the religious pillars of Islam. Pilgrims making the Hajj are the primary reason why Saudi Arabia is one of the world’s most visited tourist spots. Like a religious version of Orlando, Mecca and Medina draw about three million visitors every year, from every country in the world.

Unfortunately, the date for this year’s Hajj, November 25th to the 29th, falls right smack dab in the middle of flu season, and Muslim countries from Morocco to Indonesia have begun wrestling with the problem of religious duty in a swine-flu world.

According to the New York Times, Egypt has already banned the elderly and the very young from participating in this year’s Hajj, and some Arabic-language newspapers have called for Saudi Arabia to cancel this year’s pilgrimage altogether. Additionally, Sunni and Shiite religious authorities, two groups of people that rarely agree on anything, have both decreed this year’s Hajj optional, and said that altering plans due to swine flu fears doesn’t violate any religious laws.

In other flu news, the World Health Organization (WHO) raised the total number of deaths as a result of the new H1N1 pandemic to 700 worldwide, and predicts that the number will jump significantly in the fall and winter with the start of flu season.

Of course, there’s some good news for the start of flu season, as [ have begun, and the U.S. government has blocked out $1.8 billion for emergency spending when the flu hits again.

And this wouldn’t be a flu post if there wasn’t some bad news to go along with that good news. The bad news is that more and more flu cases are proving to be drug-resistant, with the latest Tamiflu-resistant bug showing up in a 60-year-old Canadian woman. In some other bad news, the WHO worries that rich countries like the U.S. and the UK will buy up all the flu vaccine, leaving poorer, more populous countries without any remedy for the flu.

That about wraps up the latest flu news, but, as the dog days of summer give way to the brisk chill of autumn, stay tuned.