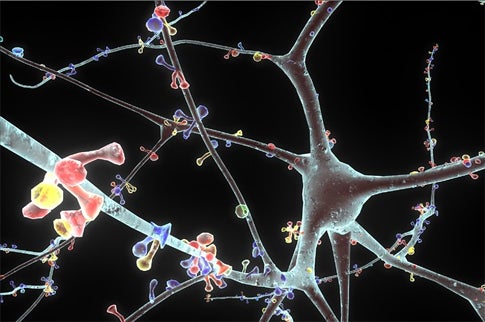 Four years ago, a team of researchers at the École Polytechnique Fédérale de Lausanne in Switzerland switched on Blue Brain, a computer designed to mimic a functioning slice of a rat’s brain. At first, the virtual neurons fired only when prodded by a simulated electrical current. But recently, that has changed.

Apparently, the simulated neurons have begun spontaneously coordinating, and organizing themselves into a more complex pattern that resembles a wave. According to the scientists, this is the beginning of the self-organizing neurological patterns that eventually, in more complex mammal brains, become personality.

The computer simulation utilizes an IBM supercomputer capable of performing 22.8 trillion operations in a second. And that’s just barely enough to simulate one part of a rat’s brain. Each individual neuron requires the computing power of a high-end desktop computer, and the small area of the brain that Blue Brain simulates contains 10,000 neurons.

The supercomputer is powerful enough to generate a real-time 3D image of what the simulated brain would look like if it was an actual bundle of biological neurons. The 10,000 neurons and their 10 million connections are color-coded in the 3D image, and that’s where the higher-order patterns were first observed. The coordination of the neurons appeared as unified waves of color, gliding from one side of the virtual brain to the other.

The researchers running Blue Brain hope that what they’re learning about the organization of neurons in the simulated rat brain will allow them to create a digital human brain within 10 years, even though that is many orders of magnitude more complex than a rat brain.

[via the Wall Street Journal]