A rainbow-hued experiment from the University of Arizona proves that ants aren’t the one-career workers we thought they were. Here,... 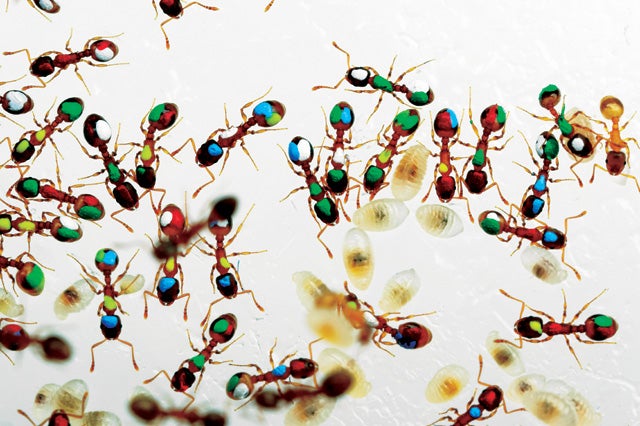 A rainbow-hued experiment from the University of Arizona proves that ants aren’t the one-career workers we thought they were. Here, rock ants dedicate all their energy to caring for their limbless larvae. Scientists once believed this type of job specialization was hardwired into each ant—that is, individual ants were capable of doing only one job—and specialization was the key to their efficiency. Having certain individuals serve exclusively as nurses, nest builders or foragers earned ant colonies the title “superorganism.” But biologist Anna Dornhaus color-coded 1,200 ants using paint to identify individuals and set them on various tasks. “It turns out,” she says, “each individual ant seems to be equally good at every job.” Instead, colonies may increase efficiency by saving in “switching costs,” the time it takes a worker to physically move from one task to another.