Incandescent Bulbs Get a Second Lease on Life 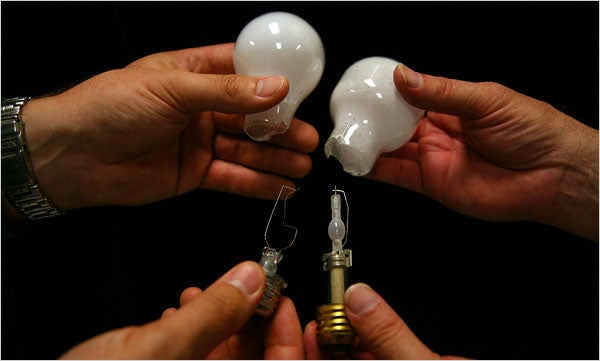 Rejoice, all ye haters of a fluorescent future. The same legislation that sparked widespread adoption of CFL lighting in favor of the comparatively inefficient incandescent bulb may have had an unexpected result: the first significant efficiency improvements in century-old incandescents in decades.

Many predicted extinction for Edison’s light bulb after Congress passed an energy law two years ago which set a 2012 deadline for increased lighting efficiency standards. But a number of companies are rushing to bring the turn-of-the-century technology up to the tougher regulations.

Philips Lighting created the first products of this new wave, the Halogena Energy Savers, which sell for $5 or more compared to 25 cents for traditional bulbs. But they end up more than paying for themselves with 30 percent more energy efficiency and three times the lifespan of a traditional bulb.

The secret behind the efficiency boost lies in special reflective coatings which bounce waste heat back to the filament, where the heat gets transformed into light. A company called Deposition Sciences has been perfecting the technology, and says that it achieved up to 50 percent energy gains in the lab, as reported in the New York Times.

All three big lighting companies, including Philips, General Electric and Osram Sylvania, are looking into further developing such reflective coatings for incandescent bulbs. They join a swarm of researchers and private inventors who have also been racing to improve incandescent light efficiency.

By comparison, fluorescent light bulbs can use up to 75 percent less energy that traditional light bulbs, but consumers have been slow to adopt them while incandescent bulbs remain cheap–-90 percent of American homes still use the old bulbs. Some people also object to fluorescent lighting’s appearance, as well as its mercury content and slow start-up time.

So despite some countries such as Ireland essentially banning incandescent light bulbs, American consumers can rest assured that Edison’s bulb won’t go quietly into the night.