A hard exoskeleton helps speed recovery time after a stroke 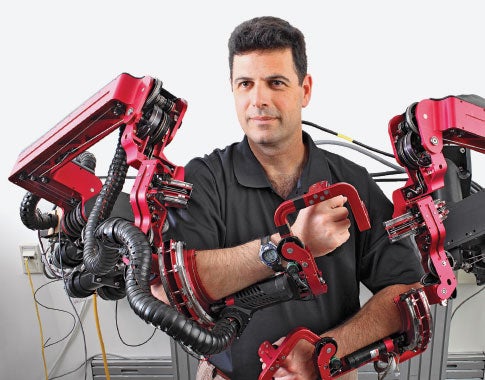 What: An exoskeleton that dramatically speeds up recovery times from stroke
Where: Santa Cruz, Calif.
Why: An estimated 780,000 Americans will suffer a debilitating stroke this year.
Wow: The robot can simulate 95 percent of the motions of a healthy human arm.

These rugged robotic arms look as if they could toss a truck, but they’re more like gentle training wheels for stroke victims who have lost movement in their arms. The exoskeleton is designed to train healthy regions of the brain to slowly pick up the slack for damaged areas and quickly restore control over muscles. A user straps into the powered arms and repeats exercises meant to stimulate new connections between brain cells. “It can do things a physical therapist can’t,” says computer engineer Jacob Rosen of the University of California at Santa Cruz, who invented the exoskeleton with grants from the National Science Foundation and the U.S. Army. Sensors assess a patient’s performance, telling therapists about his range of motion, muscle strength and brain activity, while virtual-reality goggles play scenes of everyday tasks to make the exercises more engaging. Rosen is currently rehabilitating five patients at the University of California at San Francisco.