The Physics of a Free-Fall Wedding

The barrier of true weightless nuptials has yet to be broken 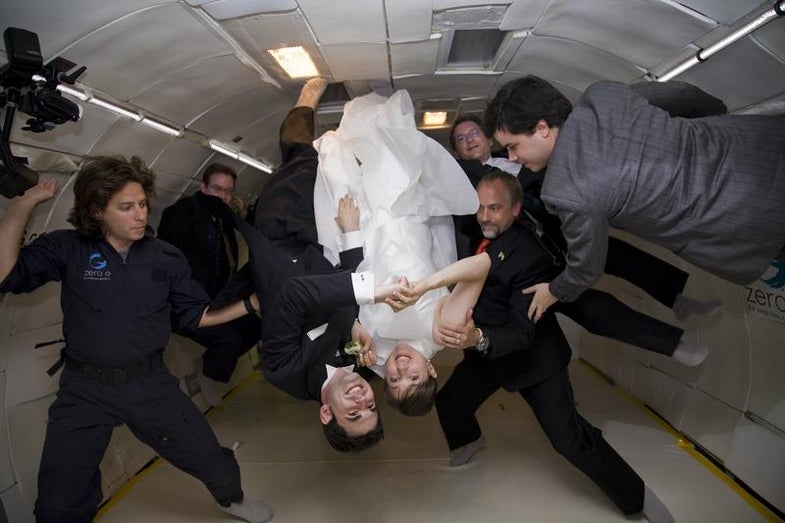 Noah Fulmor and Erin Finnegan tie the knot aboard the Vomit Comet.
SHARE

In the near future, would-be newlyweds will be able to take advantage of a commercial suborbital flight on Virgin Galactic at a newly constructed spaceport near you — Spaceport America, conveniently located in the New Mexican desert and due to be completed sometime in 2010.

At $200,000 a ticket, a two-hour sub-orbital flight is a lot less expensive than the $30 million it costs to take a vacation aboard the International Space Station, and it requires a lot less training. However, you only get a couple of minutes of simulated weightlessness, as opposed to days and days of it aboard the ISS.

You have to get a lot further from Earth than a space shuttle goes in order for the gravity acting on you to become negligible. So whether you’re getting married courtesy of a Zero G Corporation Boeing 727-200, as with our happy Brooklyn couple, doing mid-air somersaults inside Virgin Galactic’s SpaceShipTwo, or having a vodka with a cosmonaut on the ISS, remember in each case that you’re not really weightless. It just feels that way, because you’re in a state of “free fall”.

The physics works like this: Let’s say you happen to be hanging out inside a elevator car moving at a steady speed. The force of gravity pulls down on you so that your feet push into the floor. According to Newton’s third law, the floor pushes back on your feet. The total force acting on you is zero, because the downward force of gravity is balanced by the upward force from the elevator floor.

Your sense of weight is due in large part to that upward force of the floor on your feet. To prove this to yourself, all you have to do is cut the elevator cable and disable the brakes. As you and the elevator accelerate together towards the basement, there will be no force at all acting between your feet and the floor. Therefore, as you fall, you’ll receive all of the benefits and sensations of apparent weightlessness: floating, hanging around upside down, and performing unusual balletic stunts. (You could even get married, if the ceremony is short enough.) However, as soon as you hit the ground, you’ll be sharply reminded that the force of gravity is very much with you.

So remember: when you book your flight on Virgin Galactic, departing from the Spaceport America terminal in late 2010, you will experience a sub-orbital space flight, you will get a great view from outside Earth’s atmosphere, and you might get nauseous during those two or three minutes when you’re floating around the cabin. However, you won’t be weightless.