Unmanned Sub Dives the Marianas Trench on a Hair-Thin Tether 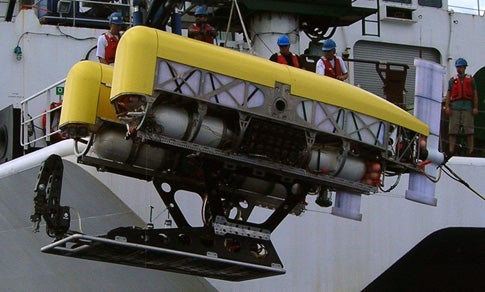 On May 31, the unmanned submersible Nereus became only the third craft ever to reach the full depth of the Marianas Trench, 35,770 feet below sea level. Built by the Woods Hole Oceanographic Institution, the sub is a hybrid of a remotely operated vehicle (ROV) and autonomous underwater vehicle (AUV). The Nereus runs on its own battery power, but researchers on a mother ship send it commands over a single hair-thin fiber-optic line that’s 25 miles long but weighs just 1.35 pounds.

“We needed a cable that wasn’t so heavy that it broke under its own weight faster than the vehicle got to the seafloor,” says Chris German, Woods Hole’s chief scientist for deep submergence. “But by using a battery-powered ROV, coupled with a single optical fiber, we get the best of both worlds.”

The cable also carries back photos and real-time video, which the operators use to direct the robotic arm, biological samplers and sensors. Because the craft is far more nimble than traditional ROVs, researchers hope to use it in other hard-to-reach places, like ice-covered seas. The fiber-optic tether technology could also find its way onto future manned ships.

For more on Nereus, including a cool interactive graphic, see the Woods Hole site here.