And these are the massive tanks used to detect them

Of all the subatomic particles that make up matter, neutrinos are the smallest. So small, in fact, that a billion neutrinos pass through your body every second without hitting a single atom. However, a new study postulates that some ancient neutrinos, born shortly after the Big Bang, may now be as large as some galaxies.

The study, first reported by National Geographic, claims that as the universe expanded, the neutrinos generated by the Big Bang stretched along with the fabric of space-time. Now, after being distorted by 13.7 billion years of cosmic expansion, those original neutrinos could be as large as ten billion light years across.

Unfortunately, those predictions bump up against the limits of modern physics. All of the equations dealing with neutrinos are calculated with the assumption that each particle is smaller than an atom. Those equations cease to make sense when applied to a particle larger than an entire galaxy.

Additionally, designing an experiment to look for these super neutrinos would be incredibly difficult. Super neutrinos contain ten billion times less energy than regular neutrinos, which themselves are so hard to detect that for decades physicist called them “the ghost particle.”

To detect those elusive particles, scientists build giant tanks filled with super pure water and lined with photo-amplifying detectors. Every once in a while, one of the billions of neutrinos streaming through the tanks strikes a water molecule. That collision causes the water molecule to emit a photon, which is then picked up by one of the detectors that line the tank. To isolate the detectors from interference, scientists built the tanks deep beneath the ground in old mine shafts, or float them above the Earth on weather balloons. To get an idea of what these detectors look like, and to see the sheer size of some of the tanks, check out this gallery of important neutrino detectors around the world. 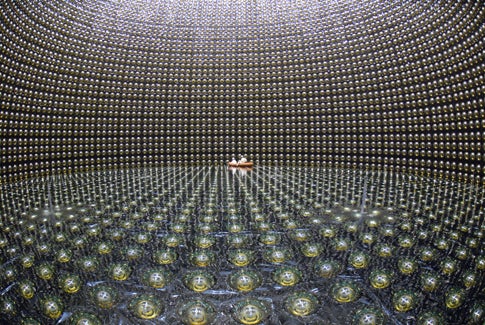 Built in an abandoned mine, the “Super-K” neutrino detector surrounds 50,000 gallons of super pure water with 11,200 photomultiplier tubes. To give an idea of the scale, that object in the distance is two men in a rubber raft. 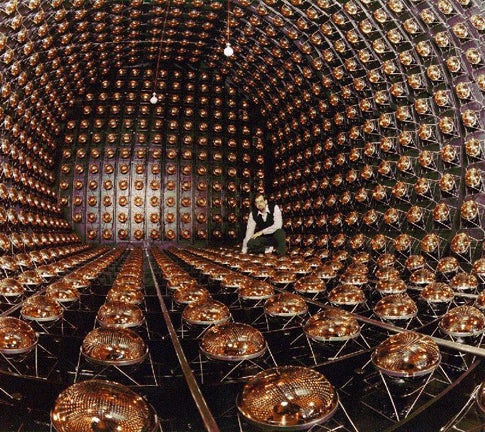 The Liquid Scintillator Neutrino Detector at Los Alamos National Laboratory contained 50,000 gallons of mineral oil, and operated from 1993 to 1998. 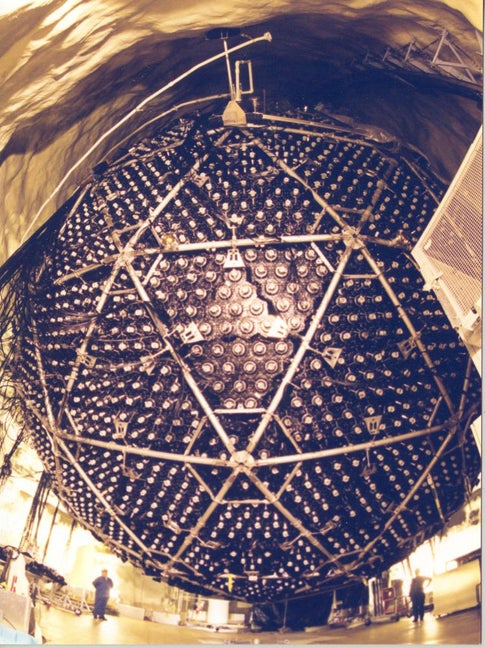 This detector is 40 feet in diameter and is located 6,800 feet underground. Data from the Sudbury detector helped prove that neutrinos do in fact have mass. 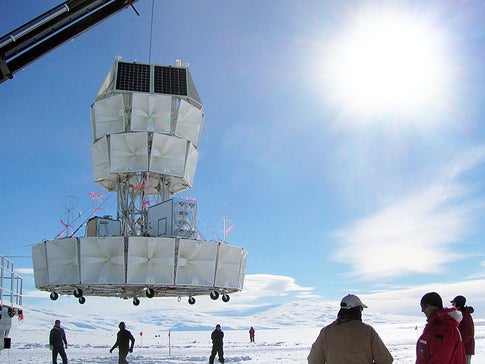 To avoid the contaminating signals generated by civilization, this neutrino detector was attached to a weather balloon and floated across Antarctica on a 35 day long flight.
big bang
cosmology
neutrinos
particle physics
Science