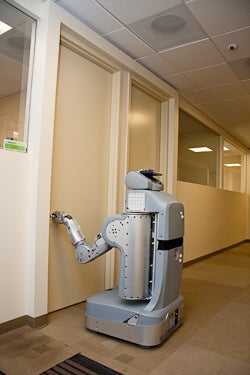 For those worried about a dystopian future where humans serve robot overlords, there has always been one brake on full robot autonomy: power. Whether it’s the batteries in a Roomba or the fuel in a Predator drone, robots always relied on humans for their energy. Now, thanks to a company started by one of the founders of Google, robots are heading for more self-sufficiency than ever before.

As reported in The New York Times, the company Willow Garage has created a robot that can successfully navigate an office building in search of an electrical outlet, and then plug itself in for recharging once it finds one. And while other past robots have been able to open doors or recharge themselves without input from humans, this robot, known as PR2, is the first robot to combine those two features, and thus represents a landmark in automaton autonomy.

PR2 uses a combination of range-finding lasers and cameras to navigate around its Americans with Disabilities Act compliant office (the lack of stairs and round doorknobs make it easy on the robot). The Willow Garage engineers also programmed PR2 to avoid locked doors, moving on to more accessible outlets instead.

As one of the scientists mentions in the article, “Now they can escape and fend for themselves.”

Jeez, I don’t know whether to order PR2 to clean Elroy’s room or to blow it up before it figures out time travel and kills John Connor.

Check out a clip of the robot plugging itself in below: