A Photon-Powered Nanomotor Made Out of DNA

The beauty of the latest, teeniest motor is its simplicity: easy to build, runs on light, no moving parts 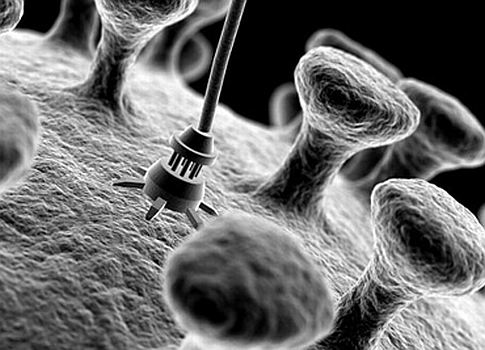 Nanomotors hold the promise of one day powering tiny robots that could do everything from fighting viruses to cleaning up toxic waste. Thanks to some scientists at the University of Florida, that day is getting rapidly closer; and some of these robots might end up solar-powered.

A new paper published in the journal Nano Letters details how the researchers created the first light-powered nanomotor out of a photoreactive chemical and a short length — only 31 base pairs — of DNA.

The motor looks a bit like a pair of tweezers. When UV light hits it, the photoreactive chemical causes the DNA to bend, which acts as the power stroke of the motor, opening the tweezers. Light in the visible spectrum, in turn, resets the chemical, closing the tweezers.

According to the paper’s co-author, Joseph A. Philips — a chemist at the University of Florida’s Center for Research at the Bio/Nano Interface — a nanomotor with only one piece allows for much easier assembly, and thus easier production.

And while Philips said that there are no immediate applications, he did add that future uses extend beyond simply powering tiny robots. Nanomotors can be daisy-chained together, so that small movements on the microscopic scale add up to large movements at the macroscopic scale. In biology, muscle contraction and plant movement both result from small motors working together to create big changes.

“These are mainly inspired by biology, where you see a lot of molecular motors,” said Philips. “We’ve seen what nature can do, now we want to see what we can do.”