Nano-treated concrete could endure for millennia, and provide a solution for very-long-term nuclear containment 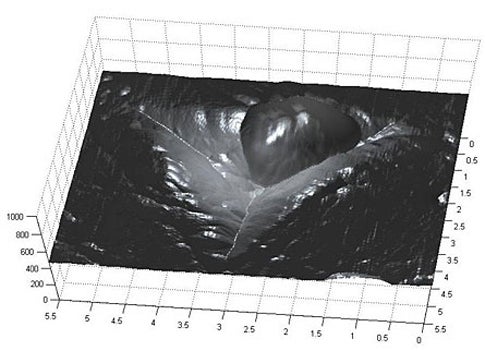 This microscopic picture shows a speck of dust deforming concrete at the nano-scale. Chris Bobko/North Carolina State, via ScienceNews
SHARE

The use of concrete dates back to ancient Rome, and the recipe hasn’t changed much since then. Neither have some of concrete’s drawbacks. In particular, the slow deformation known as “concrete creep” has afflicted structures from the Pantheon to the Pentagon. But MIT scientists believe they have solved the mystery of concrete creep, and thus opened the door to structures that will last tens of thousands of years.

The scientists, writing in The Proceedings of the National Academy of Sciences, claim that molecular-scale disturbances in the cement extrapolate into large-scale warping in concrete over time. By using denser cement, those nano-deformations could be reduced, lowering the rate of deformation by two or three orders of magnitude.

Right now, silica fumes, a common cement additive long known to strengthen concrete, has been proven to increase the density of cement, and thus the longevity of concrete. However, silica fumes only increase the density of cement by 87 percent. In the paper, the researchers mathematically calculated that the creep could potentially be slowed by as much as two and a half times. At that reduced rate of deformation, concrete currently estimated to last 100 years could last up to 16,000 years. One obvious use for such a long-lasting material would be building structures for containment of nuclear waste; the half-life of plutonium-239 is 24,000 years.

With rapid construction occurring all over China and India, and with America looking to renew an aging infrastructure, concrete is on everyone’s mind. Applying this new discovery might give everyone a couple of millennia before they need to worry about concrete again.

[via Next Big Future and ScienceNews]