With the US granting wind power plant leases off the coasts of New Jersey and Delaware, the UK planning to... 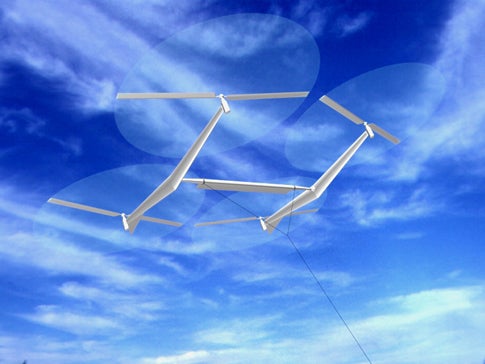 A turbine kite captures wind energy at high altitudes with spinning rotors. Electricity is sent down the wire to a distribution grid. Illustration by Ben Shepard
SHARE

With the US granting wind power plant leases off the coasts of New Jersey and Delaware, the UK planning to overtake nuclear power with wind in five years, and even coal loving China getting in on the act, all the talk about wind power these days has focused on offshore wind farms. However, a new study suggests that the wind power mother lode may be up in the sky, not off in the sea.

Sure, high altitude wind power isn’t the newest idea in the world. Not only has the tech been around for a couple of years, but companies like Kite Gen and Sky WindPower are already trying to break into the market. However, this study is the first to identify the best spots to place the high-flying turbines.

The authors took wind speed data from across the globe, recorded at heights from 263 feet to almost 40,000 feet over the last 30 years, and calculated which regions would generate the most power. According to the study, Tokyo, Seoul, Sydney and New York City all sit on a goldmine of stratospheric wind power.

During the summer months, Delhi and Mumbai could also benefit from sky high turbines. But unfortunately for India, the gusts die down in the fall and spring, reducing the energy density in the atmosphere.

Right now, no country has any plans to take advantage of the wind patterns this study uncovered. But when they do, wind high altitude wind might provide enough energy to turn NYC into Riyad on the Hudson.

[via PhysOrg.com, read the study here]