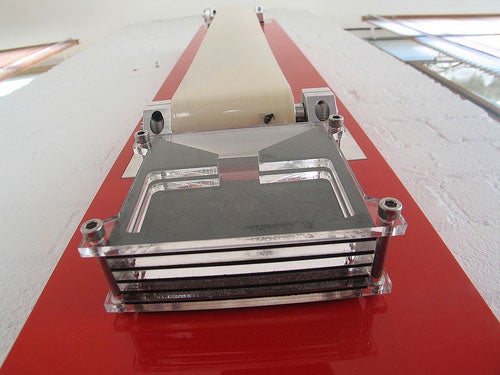 It’s the summer, which means swarms of bugs. And if you keep your window open to get cool summer breezes, it means swarms of bugs in your house. Artists James Auger and Jimmy Loizeau have designed a clock that puts those bugs–and the energy created when they’re digested by the group’s special fuel cell–to work for you.

The clock is equipped with a conveyor belt of flypaper that traps insects and transports them to a chemical bath where they are broken down in a microbial fuel cell. The chemical reactions that develop from this digestion are used to power a small clock and the conveyor belt itself. Why not rid your house of flies while telling the time?

The artists have developed a few other morbid appliances and furniture items that feeds off the flesh of animals or insects. One such design is a light that attracts insects to it using ultraviolet LEDs. Once inside, they fall into a fuel cell bath where they are digested and power the light. Another design uses a camera and robotic hand to pluck dead insects out of a spider’s web, place them into a fuel cell and power the camera and robotic arm.

The most disgusting, though, is a coffee table that doubles as a mousetrap. Enticing mice to crawl up onto the table, there’s a trapdoor in the middle that will open, dropping the mouse into another fuel cell (these guys love fuel cells). The mouse will then be digested in order to power not only the trapdoor, but also an LED display on the table.

“As soon as there is a predatory robot in the room the scene becomes loaded with potential,” Auger told New Scientist. “A fly buzzing around the window suddenly becomes an actor in a live game of life, as the viewer half wills it towards the robot and half hopes for it to escape.”

These pieces may seem gruesome, but it’s interesting that they use a very unexpected fuel to help them self-perpetuate. Perhaps the law of ‘survival of the fittest’ will now need to be extended to home furnishings.