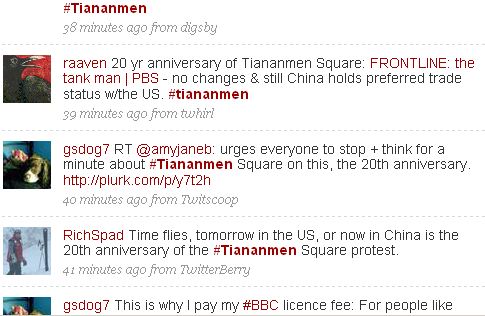 This Thursday marks twenty years since China’s military ended the 1989 Tiananmen Square pro-democratic demonstrations by killing off hundreds of students, workers, and ordinary civilians. It’s fitting, then, that in celebration of the anniversary, the government is once again curbing free speech. Censors have been at it for weeks, but now they’ve even begun cutting citizens off from Twitter, Flickr, Hotmail, and Microsoft’s live.com.

China is of course no stranger to political censorship, but this is the first time that the government has targeted Twitter. Why Twitter, why now? It’s because several prominent political activists have taken to posting there after getting blocked from Chinese chat sites and blogs.

And it’s not just the online world that’s being censored; newspapers have also been dealt their fair share of funny business. The South China Morning Post, for example, recently saw a mysterious decrease in its distribution on the mainland. As for the International Herald Tribune, a page from an article on the Dalai Lama went missing from copies of last weekend’s edition.

It doesn’t stop there. In recent days, government officials have also detained individuals, including one man who complained about the economic troubles that have visited him and other Tiananmen demonstrators in the years since they were jailed. His open letter to the government had barely been public for an hour when officials came to take him away.