Birds of a feather flock together -- right into scientists' nets 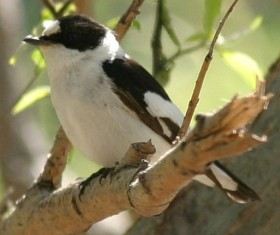 All pet owners will happily explain to you their dog or cat’s character traits — probably in far more detail than you ever wanted to know. But the idea of animal personality is not one that’s been formally studied all that much.

A new study has classed a species of bird into groups of more and less aggressive males. Researchers gauged the response of male collared flycatchers to female birds, to a strange object, and to other males. They found that each type of individual displayed consistent behavior in each of these situations.

However, they also found that the birds more likely to take risks also were the ones most likely to be trapped — and thus studied further — raising important questions about the skewed sample set presented when researchers base their findings on animals caught in traps. It’s kind of like when talk show hosts say “95 percent of 13-year olds (who responded to our online survey) are smoking pot!!!” — leaving out the part about it really being 95 percent of the particular 20 teenagers who felt like responding to our survey.