Invisibility technology: no longer just for rarefied parts of the spectrum 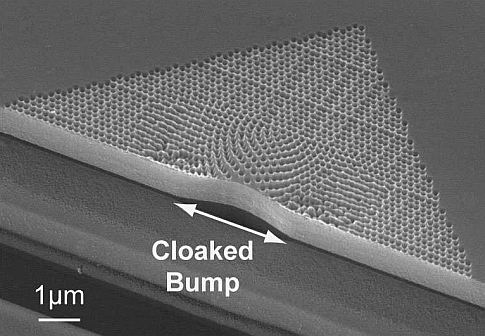 Researchers at Lawrence Berkeley National Laboratory and Cornell University both said last week they’ve designed invisibility cloaks that work in the visible-light spectrum. OK, so they’re not big enough to cover a budding young wizard sneaking around at night, but hey, it’s a step.

Two teams, led by Michal Lipson at Cornell University and Xiang Zhang at the University of California Berkeley, said their nano-scale invisibility cloaks allow light to flow around a hidden object as water flows around a rock. The cloaks contain a mirrored edge with a bulge that appears as though it’s flat.

The feat solves an age-old problem faced by children huddling under blankets: You’d still see the cloak, but now you would have no idea what lies beneath.

Previous work on invisibility cloaks, including at Duke and UC Berkeley, only worked for light that human eyes can’t see, like radio and microwaves. But new research shows silicon nanoparticles, as opposed to aluminum or other meta-materials, can work at shorter wavelengths — even in visible light.

“Our optical cloak not only suggests that true invisibility materials are within reach, it also represents a major step toward transformation optics, opening the door to manipulating light at will,” said Xiang Zhang, director of UC Berkeley’s Nanoscale Science and Engineering Center.

Perhaps unsurprisingly, the U.S. Army provided some of the funding.

The cloaks reflect and bend light in a way that fools the observer into perceiving a flat surface. The cloaks’ nanometer-size silicon materials are spaced apart at varying densities, so light flows around the bulge without distorting the view. A person looking head-on at the bulge would see only a flat plane mirror.

The main problem is scale — both cloaks are wee things that might obscure little more than the eye of a needle. The Cornell cloak works for light that’s just barely visible to humans; the Berkeley cloak only works for wavelengths barely outside what humans can see.

Zhang said it was easy to make and should be easy to scale up into visible light, however.

“Our next goal is to realize a cloak for all three dimensions, extending the transformation optics into potential applications,” he said. Applications like sneaking around where one is not allowed, perhaps?