The Grouse Weighs in on Wolfram

With the collective brainpower of Google, Wikipedia, and IMDB always just a few keystrokes away, is there really a need for another source of knowledge, factoids, and trivia on the Internet? Wolfram|Alpha sure thinks so 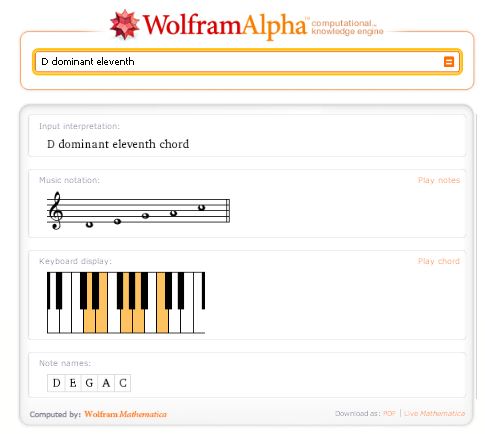 Wolfram|Alpha … what a name, huh? And I mean that in the worst way possible. Dismal chances of ever entering the lexicon aside, there’s a lot of excitement surrounding Wolfram|Alpha, which officially launched last week. If you’re not familiar with it, Wolfram|Alpha is billed as a “computational knowledge engine” and is the brainchild of British mathematician Stephen Wolfram. Unlike Google and other search engines you’ve used before, Wolfram|Alpha doesn’t return links to relevant Web pages. Instead, it spits out answers in the form of text, graphs, and maps culled from a gigantic knowledge base of structured data.

The difference is that Wolfram|Alpha aims to answer questions, as opposed to just pointing you in the direction of the answers. You know how Google performs instant currency and unit conversions, or tells you what time it is in Hawaii if you type in “current time hi”? That instant-calculation side of Google is essentially what Wolfram|Alpha aims to be for everything — a fact underscored by the presence of an equals sign on the search button, instead of the words Search” or “Find.” It’s calculating the answer instead of locating it. In fact, the underlying technology powering the site is another Wolfram joint called Mathematica. (Wolfram Research’s co-founder, by the way, is PopSci‘s own mad scientist Theo Gray.) According to Wolfram Research, Mathematica is:

Oh, and it’s supposed to recognize natural language, too.

Sounds cool! So I gave it a go. The first thing to understand about Wolfram|Alpha is that it isn’t trying to be Google. Forget asking it about your favorite band’s upcoming tour dates or about a new restaurant you want to try. Instead, think factually, like: “Mexico flag,” “owl,” “New York City sales tax,” “45 dollars in euros,” etc. Type in the name of two stocks, “IBM Apple” for example, and you get a load of useful and up-to-date charts and graphs comparing the two companies’ financials. Or try a city. Type in “Fall River” (the Massachusetts town I grew up in) and you get population statistics and the current time and temp. Type in your salary — let’s just say “$500,000/yr” for fun — and it tells you what you’re earning by the hour, day, week, month, etc, based on eight hours per day, five days per week, 50 weeks per year. It also tells you what you’re earning in yen, euros, pounds, and pesos. Of course it’s an algebra whiz, too, able to translate something like “x^2 sin(x)” into plots, charts, roots, formulas, and a bunch of other stuff I’ll never comprehend.

This information isn’t just passed along to you, either. It’s been expertly researched and constantly curated to remain as accurate and up-to-date as possible. In other words, it’s trustworthy — much more so than what Google or Wikipedia shoots back at you. For example, search “smallest country” on Wolfram and you’re given three top 10 lists according to area, population and GDP. Click on the “Source Information” link and you’ll find that this info originated from such places as the “CIA World Factbook” and “United Nations Statistics Division,” and is as current as 2009. Type the same query into Google and the top result is an About.com page. The next best think is a WikiAnswers page, which is nothing more than a reprint of the About.com list. The About.com list is based on area, it’s from 2007 and it doesn’t match up with the Wolfram list. Who are you more likely to believe, the United Nations, or About.com geography expert Matt Rosenberg? (Nothing against Matt Rosenberg.) Wikipedia’s list is also slightly different, and as obsessed as I am with the people’s encyclopedia, you can’t always believe what’s printed there.

OK, so the Wolf sounds pretty awesome so far. The problem is, I hated using it. After poking around the site for some time I realized that the information, while precise, was also very shallow. Type in “diabetes” and you get some mortality rates. Just numbers. No information on what it is, and no resources for people who have it. It’s also extremely hit-or-miss. Type in “Goodfellas” and you get the flick’s box office numbers and credits. But, type in “Trivial Pursuit” and it doesn’t know what you’re talking about. I tried “Lost” and got the chemical structure of mustard gas. Huh? As for current news, typing in “Obama” brings up a page with just four pieces of information: Barack Hussein Obama II’s full name, his date of birth, his place of birth, and his status as a head of state. It doesn’t say what state he is (or was) the head of, there’s no party affiliation, and no indication that he’s the first African-American ever elected President of the United States. Type in “Bernard Madoff” and you get the same exact amount of information, the difference being that he’s listed as “criminal” instead of “head of state.”

Forget “Wolframing” yourself. I typed in “tom conlon” and the best it could do was “tom.” And it was with “tom” that I discovered Wolfram’s Achilles heel. Clicking on my given name presented me with a wealth of information I’d never thought to look up before, but found really interesting. Apparently, I’ve got the 1,004th most popular name in the US, and there are approximately 99,225 other Toms currently alive in this country. Wow. So what’s the most popular name in the US? I typed “most popular names” into Wolfram and came up empty. I tried “most popular baby names” and still got nothing. When I typed in “given name,” I learned I could compare data on various monikers (“tom, dick, harry”, for example), but I still couldn’t find the elusive list all of this data was presumably coming from.

That’s the problem with Wolfram|Alpha: You have to use it in a very specific way. I’m sure I could find that list of names if I new precisely what to type in, but a search engine that requires an operator’s manual isn’t exactly helpful or realistic, now is it? If you do strike gold and get a response to your query, it’s always very dry and clinical — you get no sense of what this thing is all about or its place in the world. For that kind of info, you’re directed to either Google or Wikipedia, which begs the question, “What’s the point?”

The best answer I can come up with is that Wolfram|Alpha isn’t a search engine at all, but rather more like a gigantic brain. It doesn’t know everything, but it knows a ton — and discovering what it knows is half the fun of using it. If you want an answer quickly and easily, just google it. If you want to play around with a cool piece of technology, figure out how it works and test what it knows, then have a blast poking around Wolfram|Alpha. And, it can definitely be quite a blast. Apparently, the site has quite the sense of humor and has hidden some pretty hilarious easter eggs in its vast store of information. Try “Flux Capacitor” or “How many licks does it take to get to the center of a Tootsie Pop?” Find a ton more here and here.