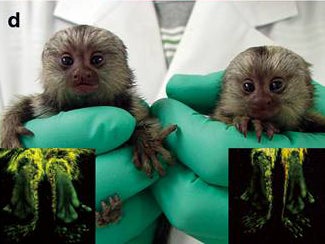 Japanese biologists have made genetically modified primates that can pass the modification to their offspring — a first for science. The researchers, reporting in Nature, introduced a jellyfish gene to marmosets that made their skin glow green under UV light, a quick, harmless test of the technique’s success. The goal is for future marmosets to bear genes for human disease. Such colonies of research animals may model neurological disorders far better than lab mice.

Glowing animals are nothing new — transgenic mice are widely used in biomedical research, and scientists have successfully made glowing pigs, dogs, and even rhesus macaques, the common lab monkey. Yet unlike the marmoset experiment, the transgenic rhesus monkeys made so far have failed to pass the gene to future generations.

The marmoset is not as closely related to humans as rhesus monkeys, but may be a more practical option. For one, they reproduce far more quickly than rhesus monkeys. “Usually marmosets have 4 to 6 babies in a year,” said team lead Erika Sasaki of the Central Institute for Experimental Animals in Kawasaki, Japan, in a press briefing. “We can expand lots of animal colonies if we establish a transgenic founder marmoset.”

Sasaki’s team made such a founder. They used a virus to insert the fluorescence gene into the DNA of 80 fertilized marmoset eggs. Surrogate mothers successfully bore five infants named Hisui, Banko, Wakaba, Kei, and Kou. Last month, Kou fathered a son that retained the gene, confirmed both by glow and genetic test.

Next, Sasaki’s group plans to integrate genes for Parkinson’s disease and amyotrophic lateral sclerosis (Lou Gehrig’s disease) into the lab’s marmosets. These are complex brain diseases that mouse models don’t faithfully mimic. The researchers say they are genetically simpler to incorporate into primate DNA than, say, genes for cystic fibrosis — but the team has their eye on modeling that disorder, too.

“Scientists may be able to mimic Parkinson’s-like symptoms in the marmosets over several generations to help us get closer to a cure,” said Dr. Kieran Breen, Director of Research and Development at the UK’s Parkinson’s Disease Society.

What the breakthrough might mean for the number of primates used in research is uncertain. On the one hand, their use might increase like it has with transgenic mice. It could also have the opposite effect because of the specificity of the disease model. “This new development may ultimately decrease the need to use other animals for research, which can only be a good thing,” says Breen.